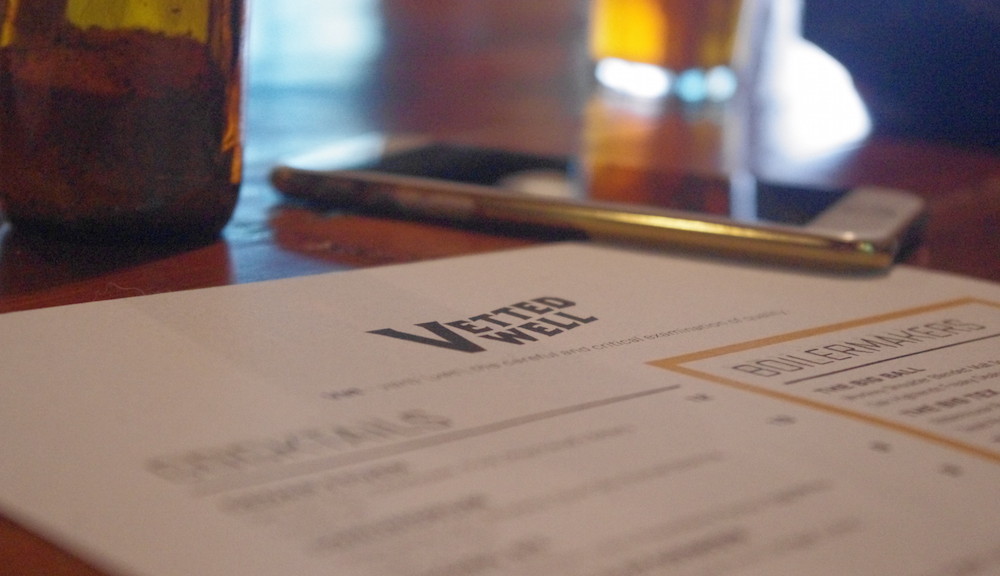 Vet – verb \vet\ the careful and critical examination of quality

Vetted Well, the new bar above the recently-opened Alamo Drafthouse on South Lamar, may be one of my new favorite places.  Damn good food, a great beer selection (complete with 10 perfectly-paired boilermakers), one of the best rooftop patios in Dallas, themed private karaoke rooms, and a location directly above a quirky movie theater make for a great experience.

While Vetted Well does a lot … well … they have done well in not specializing in anything at the expense of others.  Perfect example: they have a damn good (local) beer selection (cans, bottles, and a bunch of drafts), but also have awesome cocktails and a small (but thoughtful) wine list.  They have some healthy food, but also some food that makes you want to break your Lenten commitment not to eat fried food (oops …). 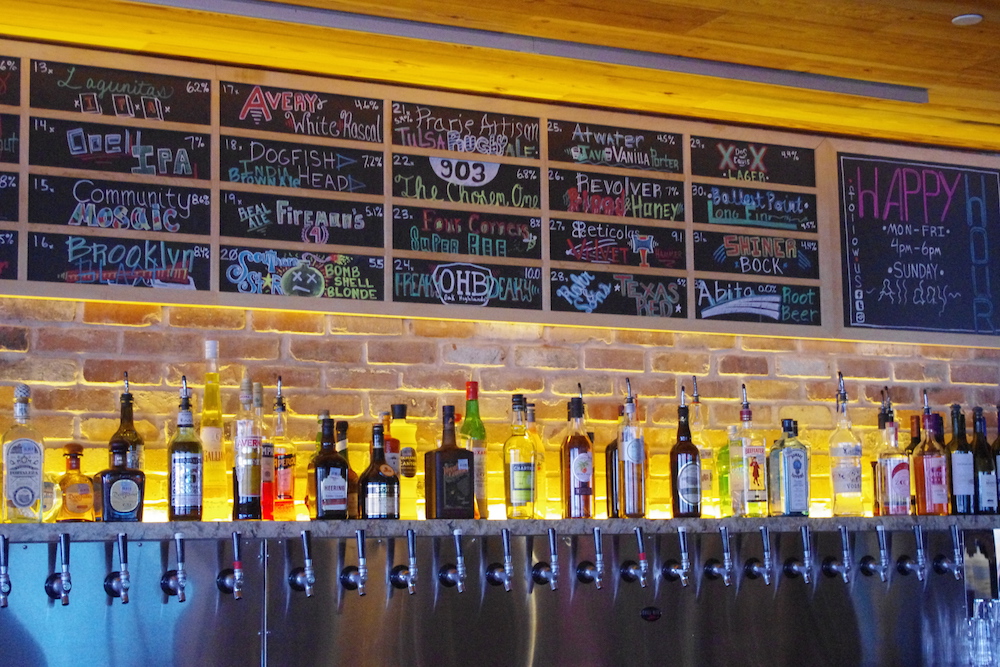 My review was actually my second visit … my first visit was with a  couple girlfriends after a movie to catch up a bit.  We enjoyed a shit ton of popcorn (which, if you order in the bottomless popcorn in the theater, you can continue working on finding the bottom upstairs), a Darker & Stormier (a seriously delicious take on the Dark & Stormy–apply brandy, Black Seal rum, ginger, lime, and crushed ice) and The Traveling Man (Eagle Rare 10 Yr. & Karback Weekend Warrior whiskey).  I was so excited to come back, that I nearly died when I saw the email inviting me in for a review.

I was spoiled with a couple boilermakers, a couple cocktails, and alllllllll the food (more on that later because, cocktails).  Their Moscow Mule was the traditional recipe (vodka, lime, ginger beer) and was well mixed, but the copper vessel was badass–because I’m kind of over copper mugs.  Next out was the Kentucky Buck (bourbon, strawberry, lemon, bitters, ginger beer), which was completely refreshing and I cannot wait to sit on their patio and sip three of these on a warm, spring afternoon.

Let’s get back to those boilermakers.  Ten options, all decidedly Dallas with names like The Grassy Knoll and The Big Tex, make for a good challenge.  I’m four down so far, (… not as accomplished as Kevin, but I’m working on it) and I’m enjoying the progress.  Paired thoughtfully, my favorite so far is The Sears & Roebuck (Gran Classico & 512 Pecan Porter), but I look forward to trying the remaining six to see if it stays on top.  (There was talk about the technique behind drinking a boilermaker.  Do you take the shot of whiskey then sip the beer, sip both at once, or dunk the shot?)

Now … the food.  Everything they make is as homemade as possible from the mustard to the … other delicious stuff, and they also source from local vendors like Empire Bakery.  They’re currently serving lunch from their kitchen with brunch and then dinner to follow, but if you’re up there for dinner now, you can get items from the Alamo Drafthouse kitchen.  They bring it up with a dumbwaiter,  which they claim can hold 200 pounds … and I’m still upset they wouldn’t let me ride in it.  (Read: stay tuned for a staged dumbwaiter incident complete with live Twitter feed.)

We started with the Biscuit Beignets.  They hit the table and I knew my Lenten “no fried food” pledge was in trouble.  I figured that, as my mom says, Sundays are cheat days … and I’d been to church earlier.  So, I dug in.  I’m damn glad I did.  These fluffy, fried nuggets are perfectly light and come with dippable cinnamon sugar, raspberry syrup, vanilla bean crème, and spiced rum caramel.  Hot damn.  Next up was more fried goodness (because why just be a little bad?), Croquettes with smoked gouda, potato, bacon, and green onion, and served with a dill-lish dill ranch.  (Terrible joke … sorry.)  To round out the first “course”, they brought out the Panzanella Salad which, aside from the Brussels sprout I snuck off the plate while taking a picture, was snapped up before I could take a bite.

The heavy hitters of the meal were still to come–the 24-Hour Brined Pork Chop, Chicken Fried Chicken with Local Honey, Carved Turkey on Hippie Bread, and the Cubano sandwich.  All delicious and all recommended.  They mix it up by serving the pork chop with a waffle–take that chicken and waffles!  I’ll be having this one again thanks to the incredibly flavorful chop.  My other favorite was the Cubano (roasted pork, sliced ham, Swiss cheese, house pickles, and beer mustard served with traditional tostones).

I’m actually upset with myself for not requesting the Vetted Well Burger … this thing is a work of art–a burger with pork beans and pork belly?  That’s some genius shit right there.

Overall, Vetted Well is quite the delight.  The patio is unreal–both the front and back one.  The front patio has a great view of Downtown Dallas and the back patio is complete with locally made furniture and a giant outdoor screen where they’ll show classic movies a couple times a week.  If that’s not enough entertainment, check out one of their four themed private karaoke rooms for rent by the hour to accommodate 6-20 people.  You know I’ll be hitting those rooms hard with some hardcore Hall & Oates.  The karaoke rooms will be open to the public starting Thursday.

I can’t wait for the next rainy weekend when I can commit to spending an entire day bouncing between the theater and Vetted Well to get my hands on their burger.  Who’s with me?

Overall, I think their name is deserved.  I was told that “vetted” is used often in the military as a quality check.  While I’m not military, I feel as though I can still give this place my seal of approval–it has been vetted … and it’s gooooood. 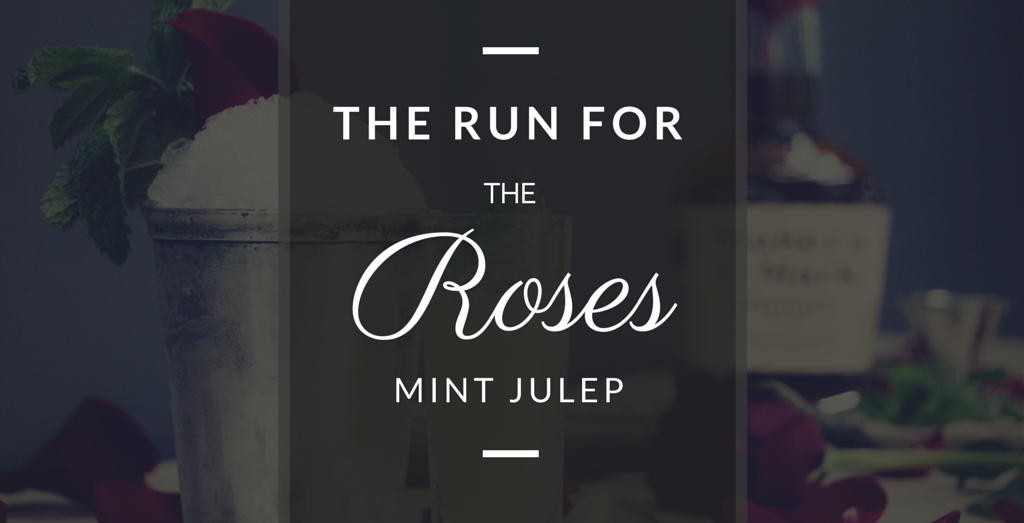 I was honored to have been recruited by Maker’s Mark to participate in their first-ever #JulepOff!  The challenge: remix the Kentucky Derby classic, the Mint Julep.

Their traditional julep is as follows:

Muddle mint and simple syrup. Mix with Maker’s Mark and distilled water. Fill a julep cup with crushed ice and pour the mixture over the top of the ice.  Sprinkle a bit of powdered sugar over the ice and garnish the drink with a mint sprig.

While delicious, I think we can do better here at Susie Drinks Dallas!  Presenting the Run for the Roses Julep!  We decided that rosewater would give the traditional julep unique flavor … and it looks sexy as hell.

Run for the Roses Julep

Muddle the mint leaves and simple syrup. (Don’t overmuddle or you’ll be sad.) Add the bourbon and rosewater, stir lightly.  Fill a julep cup with shaved or crushed ice then pour the mixture over the ice.  Garnish with a rose petal and mint sprig.  Lightly sprinkle powdered sugar over the drink. 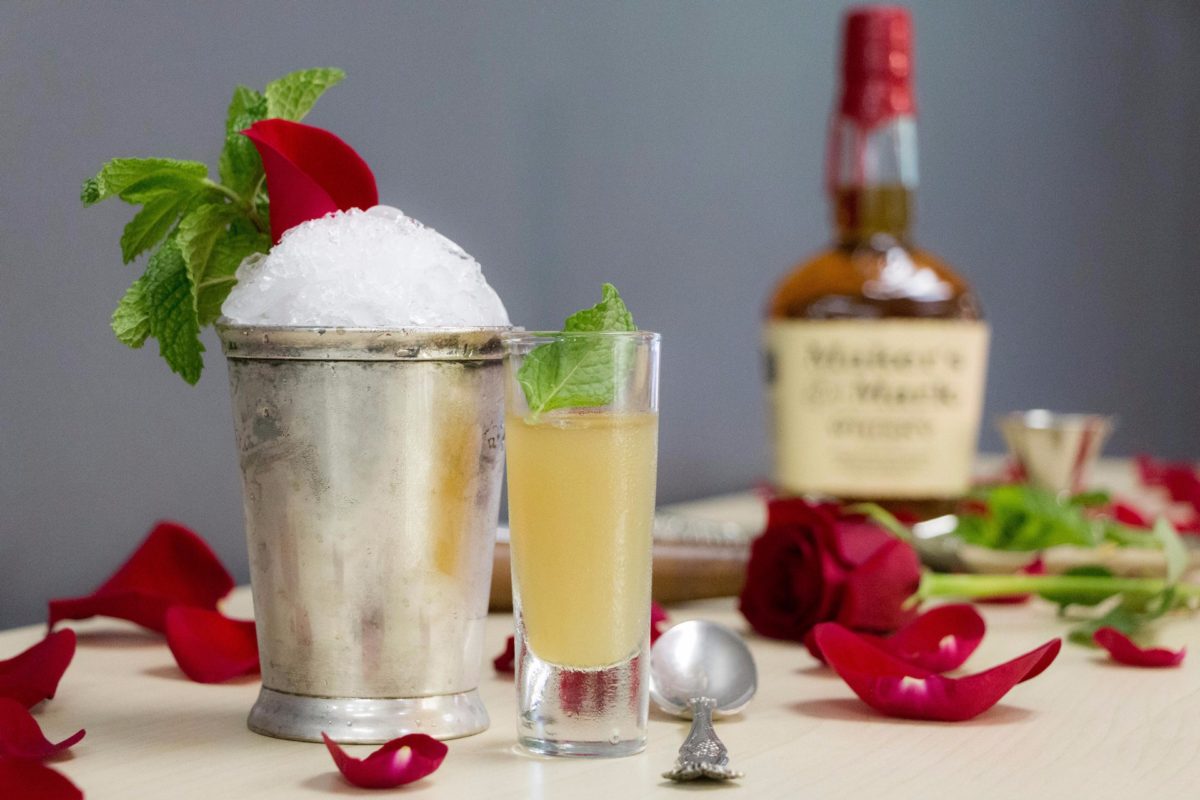 Want to up the ante?  How about some Mint Julep Jelly Shots!?

Put gelatin into cold water in a saucepan then let sit for about 5 minutes.  Add the mint leaves and sugar, then heat over medium heat for about 4 minutes, then turn the heat off and let sit for 15 minutes.  Strain and then stir in the Maker’s Mark.  Pour into shot glasses then refrigerate for at least 5 hours.

I’d greatly appreciate your support in the #JulepOff!  Please visit the Maker’s Mark Pinterest starting 4/23 and REPIN my recipe!  I have until May 1 to get as many REPINS as possible.

Roses not your thing? Some other recipes I came up with are below!

Muddle the mint leaves and lavender simple syrup. (Don’t overmuddle or you’ll be sad.) Add the bourbon, stir lightly. Fill a julep cup with shaved or crushed ice then pour the mixture over the ice. Garnish with a lavender stem and mint sprig. 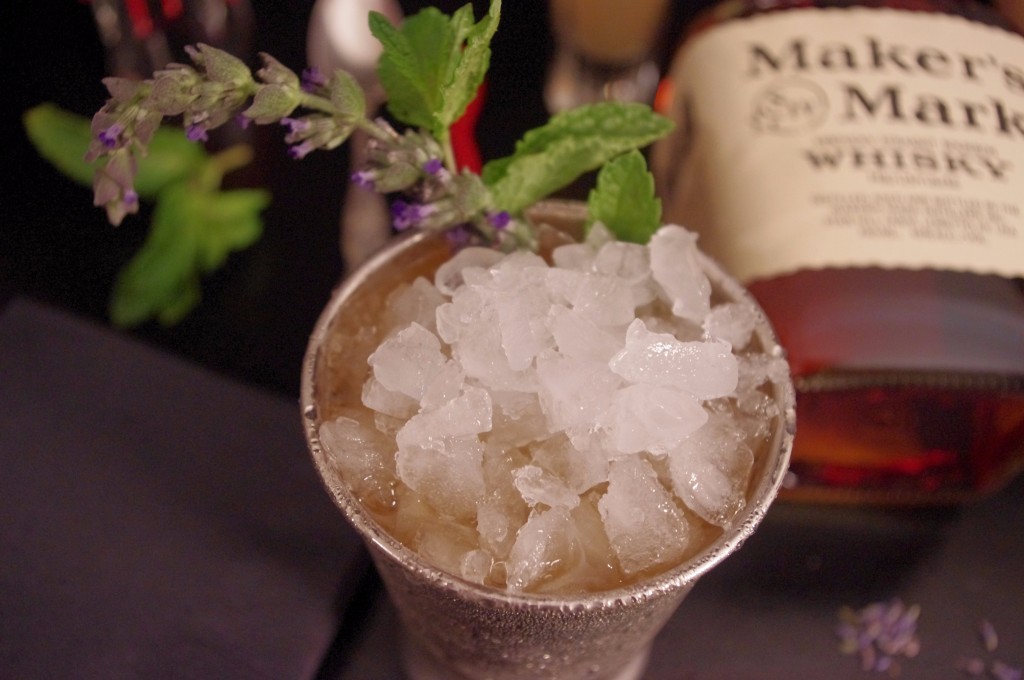 Combine ingredients in a julep cup and lightly muddle.  Add crushed ice and garnish with a mint sprig. 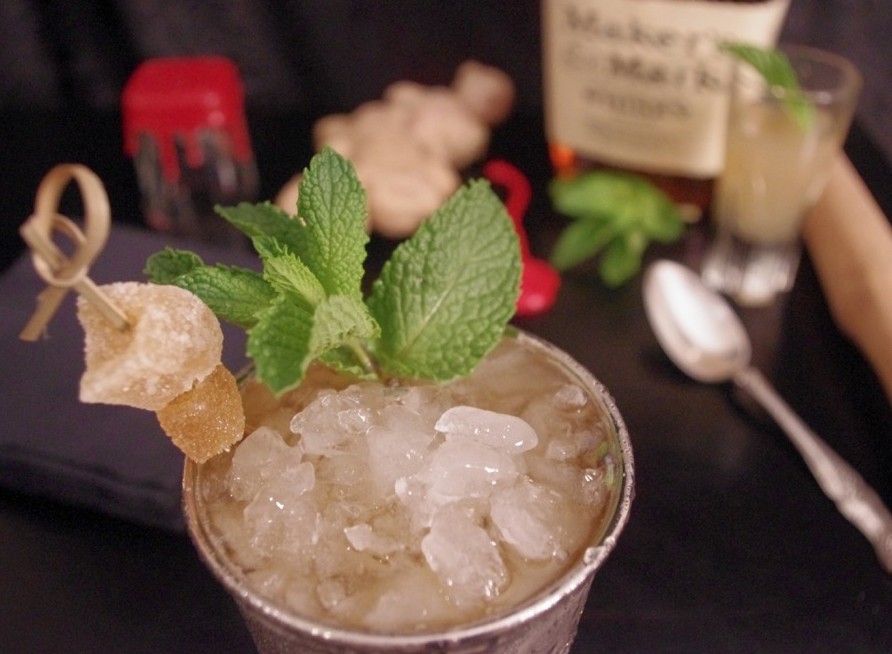 A huge thanks to my favorite guys over at The People’s Last Stand for their help getting the recipe perfect! 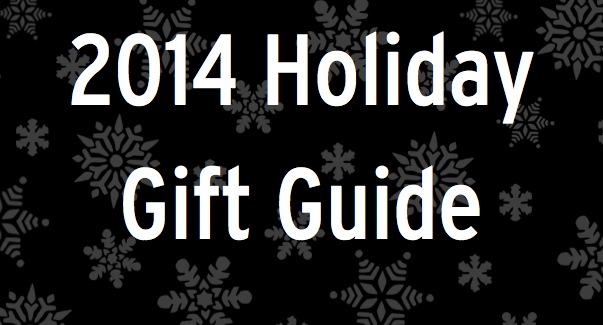 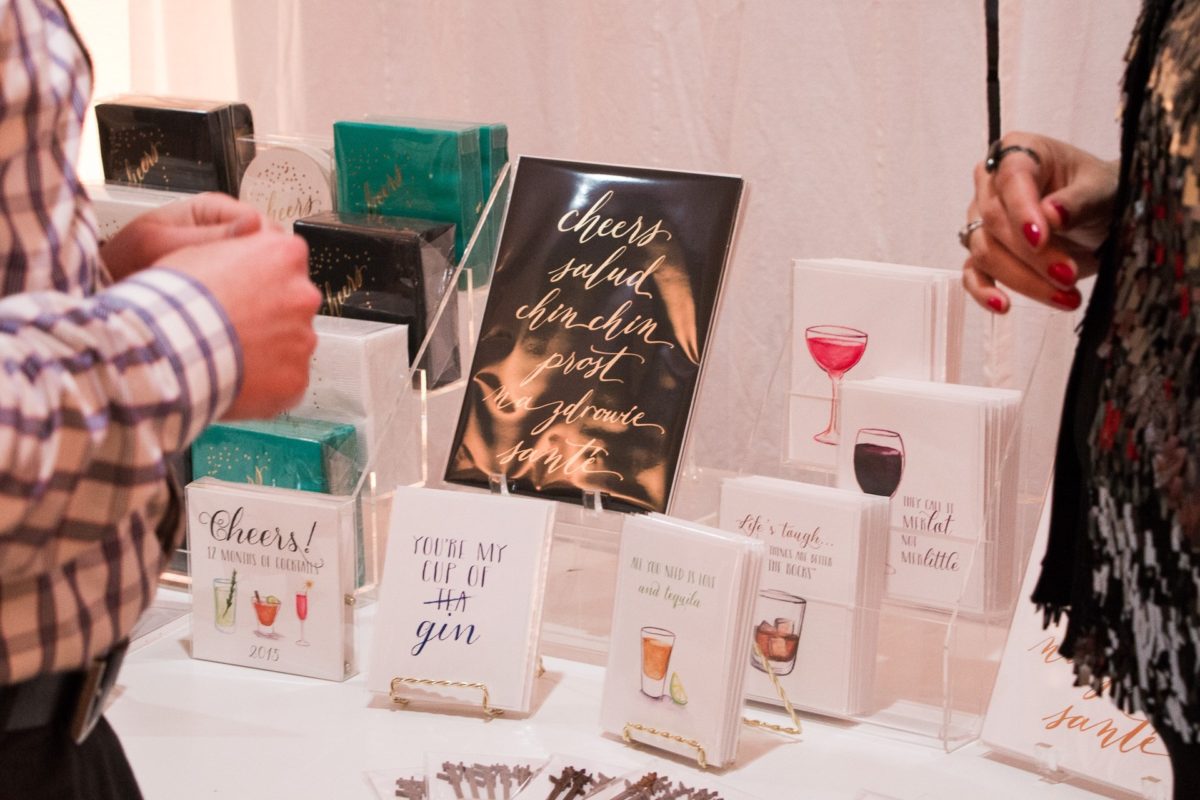 SNAIL MAIL COCKTAIL
CHEERS by Southern Fried Paper & SusieDrinksDallas,  a collaboration I’ve been working on with Southern Fried Paper, is now available for purchase! With boozy cards, prints, coasters, swizzle sticks, and more,  you can send a friend a note telling him he’s your cup of whiskey!

I mean … if you like me at all you’ll check out what we’ve done.  No pressure. 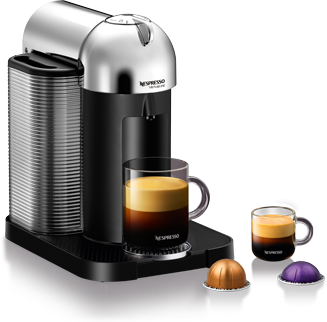 If you need ideas for cocktails to get you buzzed and wired, check out some of my Buzzed Boozing recipes here!

Price: $299 for the VertuoLine system
Purchase: Online or at the NorthPark Center boutique

I obviously need something to put my yummy espresso in … duh.  I chose Nespresso’s Pixie Espresso cups in black (Ristretto), but they come in a bunch of colors, including rose gold!  (I won’t judge your color choice.)  I also just realized that it looks like a pod upside-down.

Price: $35
Purchase: Online or at the NorthPark Center boutique 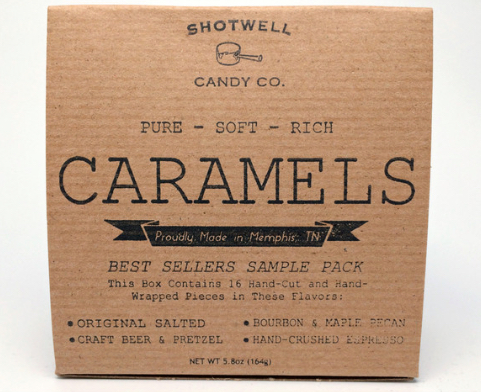 CHEWABLE COCKTAILS
Anyone can make an Old Fashioned in a glass, but how many of you can say that you can make it as a rich, chewy caramel?  Shotwell has a cute 4-flavor caramel sampler that includes each of their four featured flavors, including Old Fashioned and Craft Beer & Pretzel that is perfect for boozy gifting! 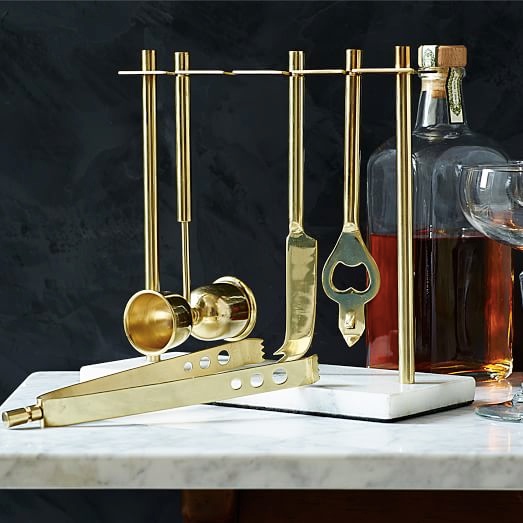 DON’T BE A TOOL … JUST GIVE A TOOL
My whole apartment is black, white, and gold, and that makes finding bar tools a bitch to find.  Luckily West Elm’s Deco Barware Collection is a set of gold-finish bar tools to help me round out my bar cart (which coincidentally was also purchased at West Elm). 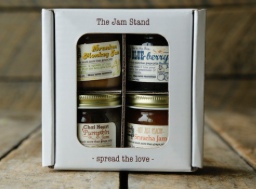 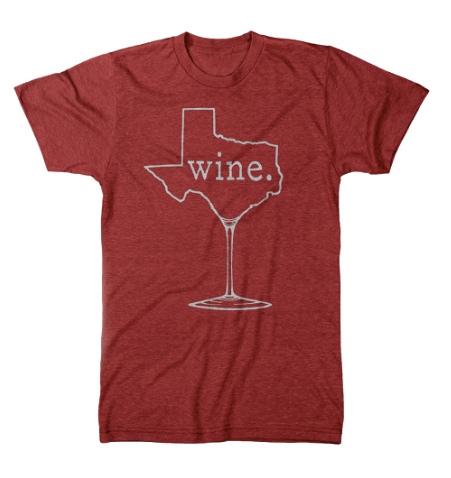 WEAR YOUR COCKTAIL ON YOUR SLEEVE
A local t-shirt company started by two Frisco teachers is making a splash with their soft, wearable tees.  Tumbleweed TexStyles lets you show your Texas pride … and your drink order!

Price: starting at $9.50 (and get 20% off any apparel, gear, and glassware with the code SUSIE)
Purchase: Tumbleweed TexStyles LOBALL A HIGHBALL
While cold balls can be a problem, these are a solution.  The LoBall Whiskey Sphere is a stainless steel ball is filled with a cooling liquid that has a lower freezing point than water, so it stays cooler for longer.

Bonus: you can have it engraved with any text you’d like or even a custom image for just $10. 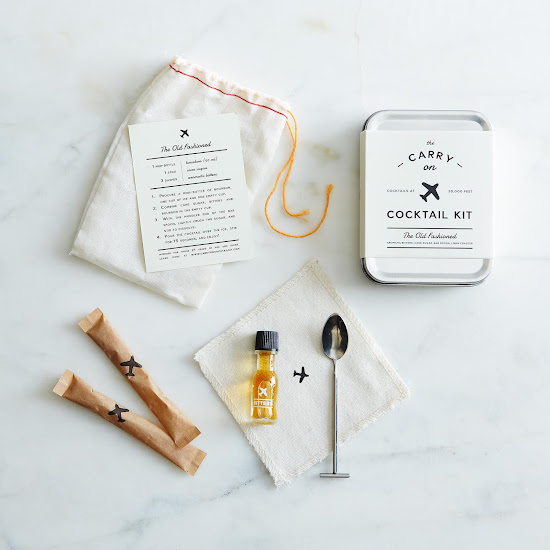 IN-FLIGHT BUZZ
Complete with a spoon/muddler hybrid, bitters, cane sugar packets, a coaster, and recipes, this Carry-On Cocktail Kit is a tin that helps make the crying baby and the dry, recirculated air a little less awful.  Plus, getting drunk at 10,000 feet is easier. 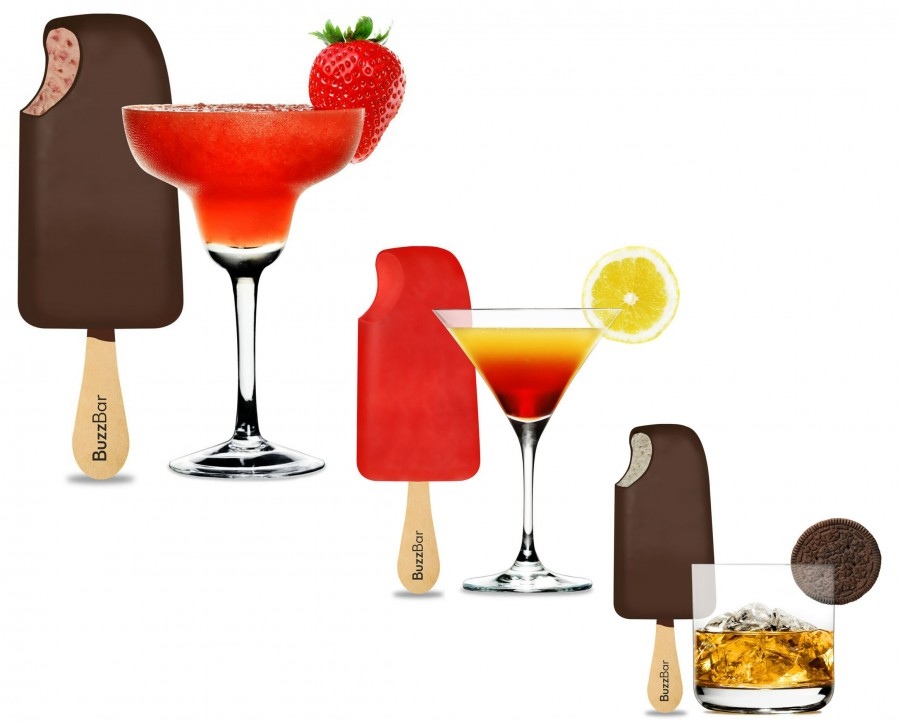