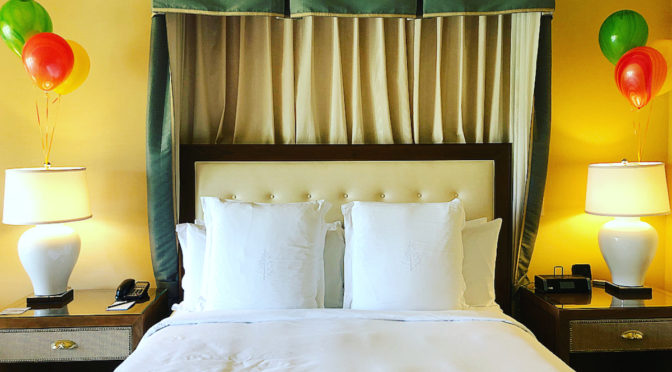 Sometimes a girl just needs to get away. But with all the (shudder) responsibilities, it’s nice that you don’t have to go  TOO far. For me, the perfect answer to scratch the staycation itch last week was a one-night villa stay at the Four Seasons Resort in Las Colinas. The drive from my Oak Cliff apartment to the resort was less than twenty minutes, but it felt like a world away. A world where I could just sit back in my plush terry robe and let the relaxation wash over me while I starfish the coziest, most comfortable king size bed.

Now, I had more reason to want a luxe getaway than just my own Calgon Take Me Away moment. It was also my boyfriend’s birthday weekend, so I wanted to make it special for him. Jackie, Samantha, and the room reservations team were so amazing and helpful with making sure our villa room was decorated and even had a birthday dessert surprise for him when we arrived. 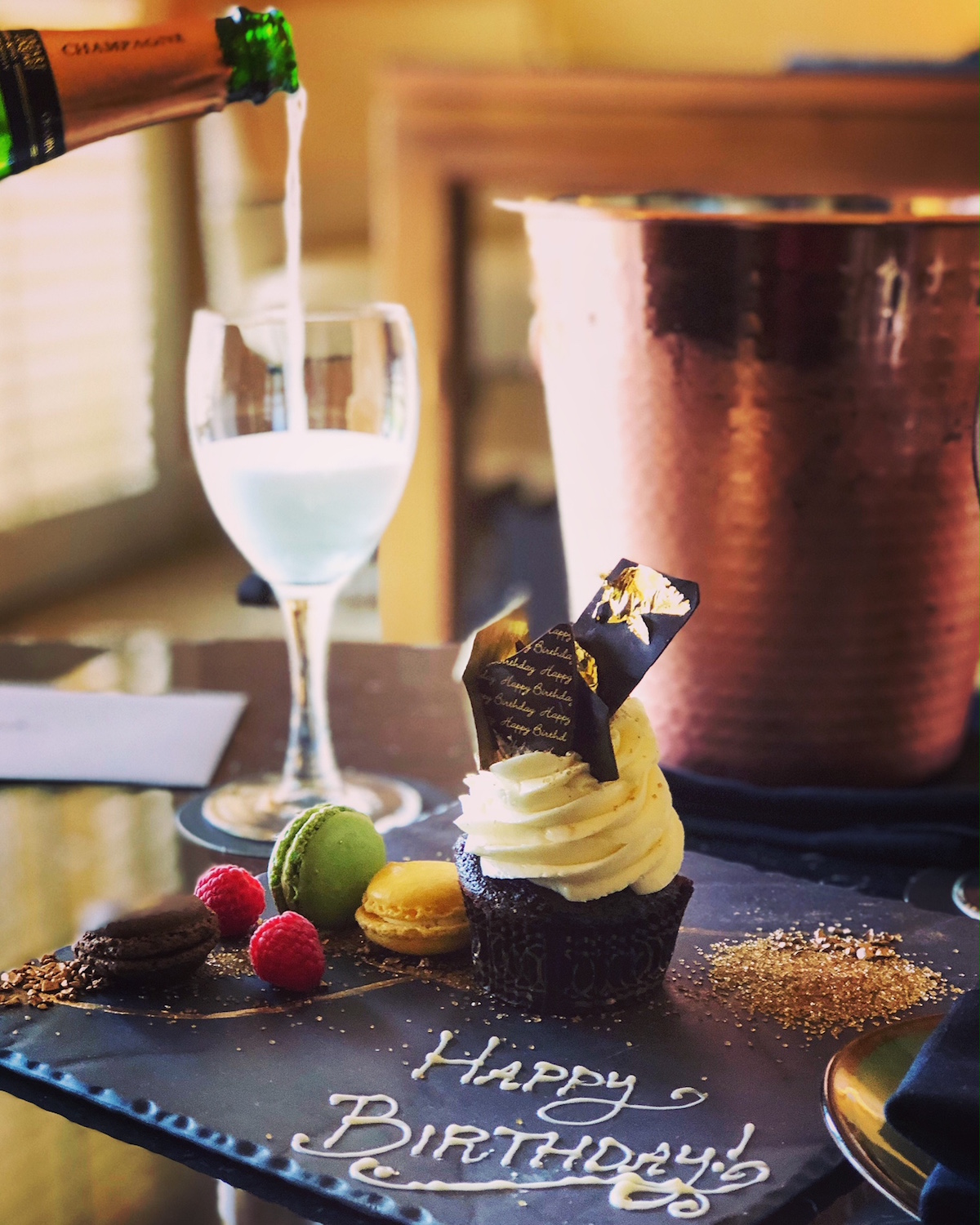 The villa room we stayed in is separate from the main building, so once we unpacked and got situated, I used the Four Seasons app (more on this marvel later) to request golf-cart service to transport us back to the lobby so we could go to OUTLAW Taproom for a late lunch. Our driver was ready for us by the time we walked to the front courtyard. The drive was short and gave us a nice tour of the golf course and the main pool. 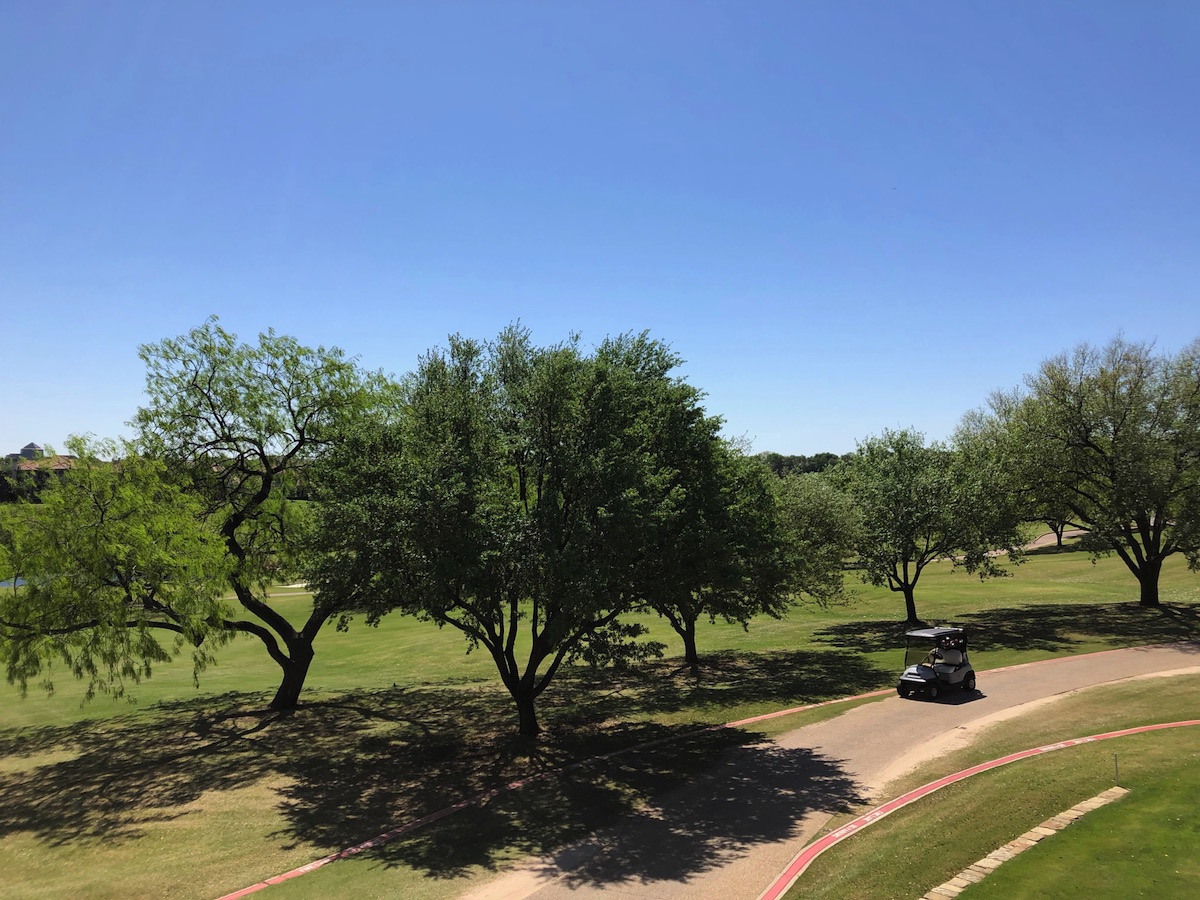 Lunch at OUTLAW was quick with friendly service. We were famished so we both ordered burgers to satisfy our hunger and then moved outside to enjoy drinks on the covered patio overlooking the resort pool. 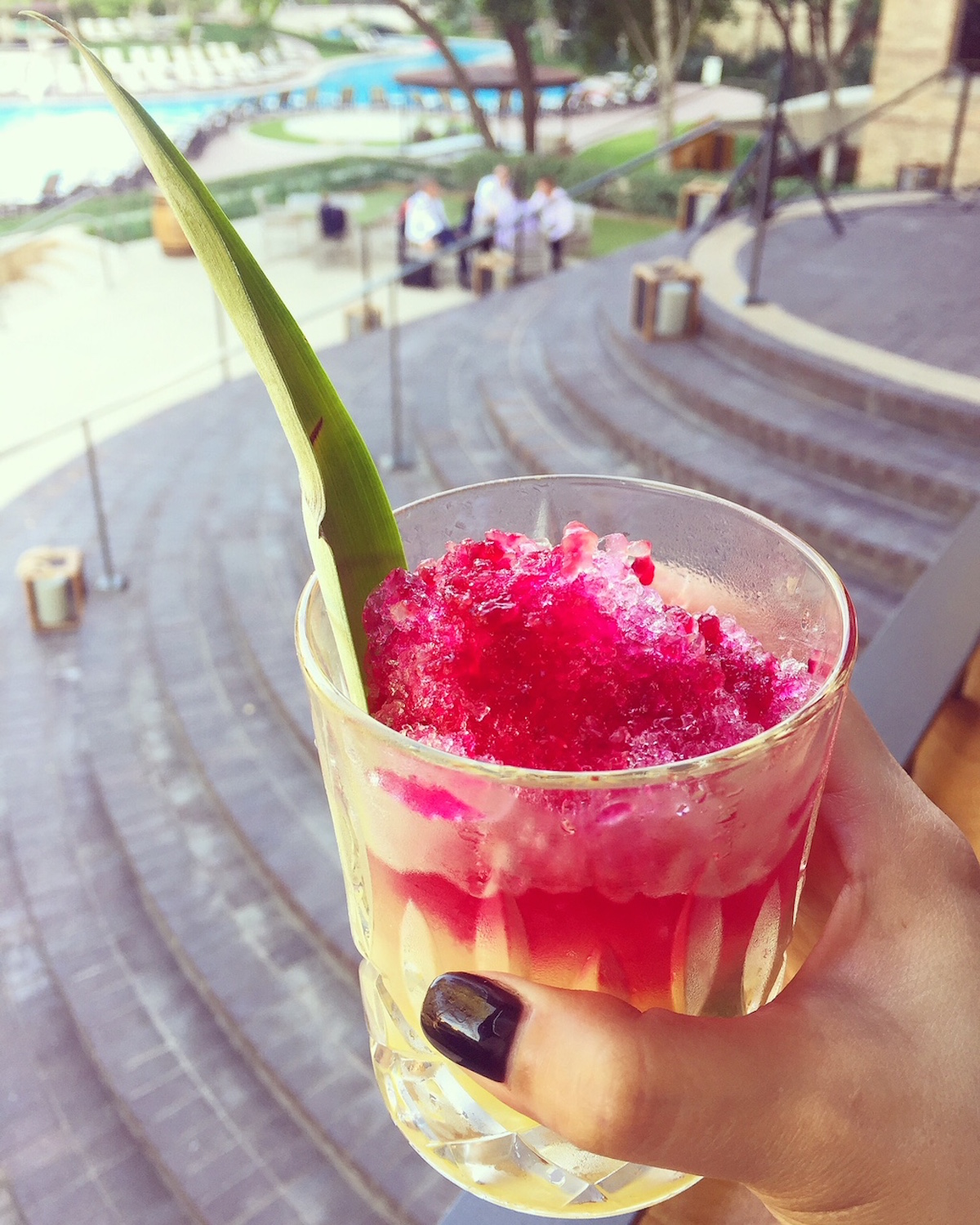 After our lunch and cocktails, we returned to our room, and no shame, we got in bed and started watching “Fixer Upper” on TV. Before we knew it, it was four hours later and we hadn’t moved an inch, but it felt so good to relax in the room! So instead of heading back out to LAW, the steakhouse on property, we opted for room service. Using the Four Seasons app again, we ordered our hearts out like it was UberEATS, and within an hour, two attendants rolled in our feast on a mobile table.

I didn’t remember to take a photo of the room service table because we attacked it so quickly, but rest assured, it was delicious and very fulfilling! We ordered a tequila-poached shrimp cocktail appetizer, salmon, chicken, AND steak entrees (good grief!), as well as a New York cheesecake dessert that had a sweet happy birthday message scrawled around the plate.

That meal effectively put me to bed, and the next morning I enjoyed a nice cup of Nespresso coffee on the balcony … still in my robe of course. 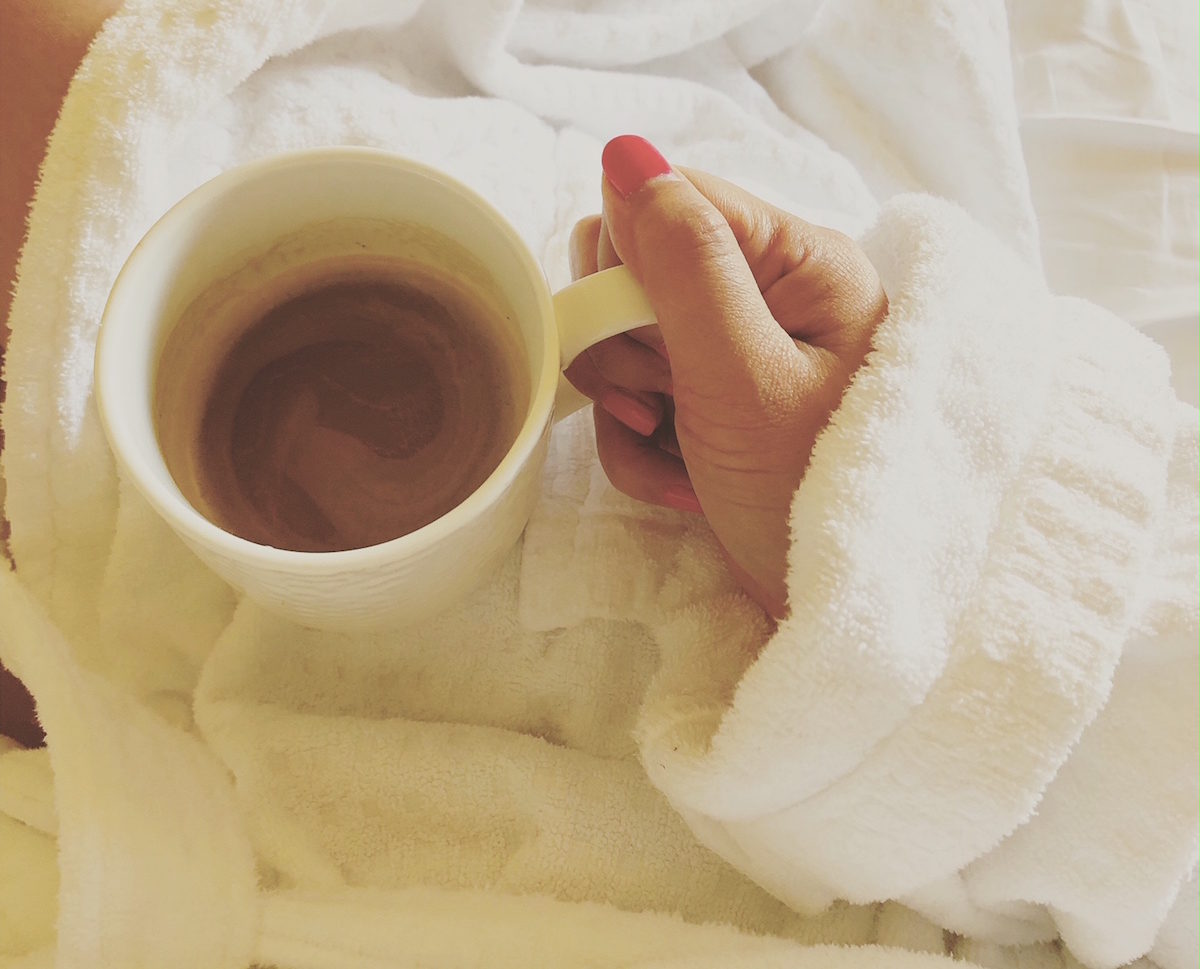 Also, I mentioned the Four Seasons smartphone app earlier and said I’d say more about it: The app’s interface was so convenient to use, I have to make a point to sing its praises. I used it to check in a day early, and because of that, my room was prioritized on my day of check-in, and I was alerted that it was ready for me before noon, when standard check-in time is 3PM! I also used the app’s chat feature to request the birthday welcome amenity and every time I needed transportation from room to lobby (and vice versa). When it was time to check out, I used the app as well, and my folio was promptly ready for me to review. Everything was so easy to use, and I always received a prompt response. The app gets fives stars from me!

We didn’t rush to leave since we had a late check-out time and had the room until 3PM. So after a shower in the roomy marble bathroom, we made our way to LAW for its decadent mimosa brunch. One word: SEAFOOD. I’m talking shrimp, oysters, crab claws, mussels, ahi poke, smoked salmon, THE WORKS. For $59/person (which includes two mimosas), the price is so worth it on the seafood alone! But for those who aren’t as crazy about seafood as I am, there’s bountiful other options which include omelet and carving stations, pastas, salads, breakfast staples, pastries, sushi, and an entire room dedicated solely to sweets (which includes a station making fresh donuts).

Somehow, we didn’t eat ourselves into food comas at brunch and actually made it back home. It was a perfectly relaxing and quick getaway. I really felt like I was out of town for the weekend and came back rejuvenated. Thanks to the Four Seasons for providing a wonderful weekend experience! I’ll find another excuse to stay there again one day. 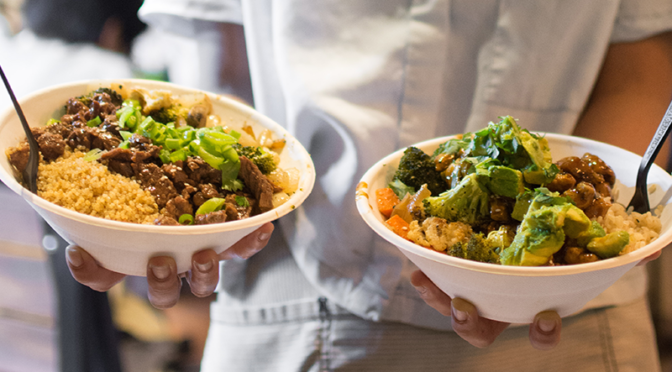 Eating healthy is haaaaard. I realized I could immediately end the sentence there and hit publish, but allow me to continue. As someone who has worked in the Las Colinas area off and on since 2005, finding a quick, cost-effective healthy lunch has basically been like searching for a unicorn. I can rattle off the calorie content of various chain sandwiches or bland salads and have double protein/replace rice with lettuce’d myself into more lunches than I can count. It has often seemed like everyone else can easily grab healthy bowls, juices, salads, and shakes quickly and not figure out to adjust their breakfast and dinner to keep from going overboard (or spend hours each weekend meal-prepping or whatever people more disciplined than me always do.)

That’s why when I saw the news that Original ChopShop was coming to Las Colinas/Irving (and is soon to open two more locations in the Dallas area), I felt a ray of hope. While there are some really good food options in the area, they’re either hard to get to, a bit on the slow side, or not cheap … and and all of which can make the work lunch run more difficult. ChopShop is right on Macarthur at George Bush, so it’s accessible with a quick-service counter and plenty of room.

Their menu covers a range of options, including protein bowls, sandwiches, salads (that can also be made into wraps), superfruit bowls, yogurt parfaits, fresh juices, breakfast items (millennial-approved avocado toast, bowls, sprouted grain bagels, and wraps along with coffee) and a variety of protein shakes. My coworker and I were able to hit the start of the lunch rush at 11:30am, order our items, eat, chat with a few staff members, and be out of the building in 45 minutes. That’s pretty great for a restaurant of any type operating in its first week.

The food itself was refreshing. We ordered two protein bowls (Thai Coconut Chicken and Teriyaki Chicken), two juices (Cool Down and Face Lift) and tried the Açai and Pitaya bowls for desert. It was a ton of food … but every item was good—the meat was quality, the veggies were fresh and the sauces were balanced with the meal, which is usually not the case at similar establishments. 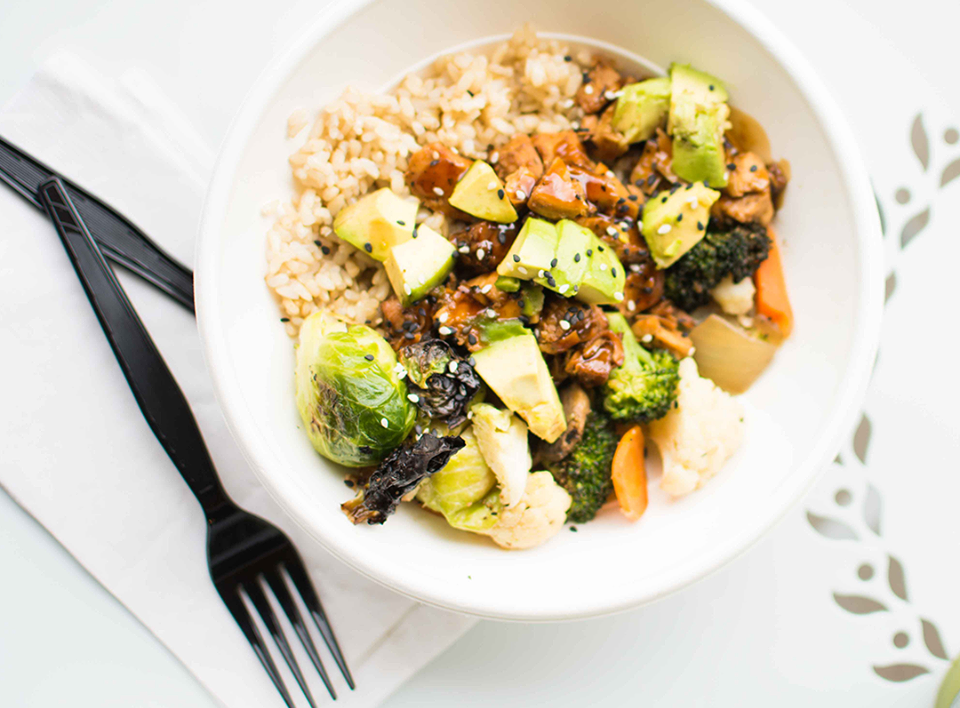 The massive juice list was hard to whittle down, but Facelift was incredibly refreshing without being  too sweet. The superfruit bowls were also balanced, especially the Pitaya Bowl. I know açai is the cliché choice, but the Pitaya one was on par with some of the better bowls I’ve had anywhere. 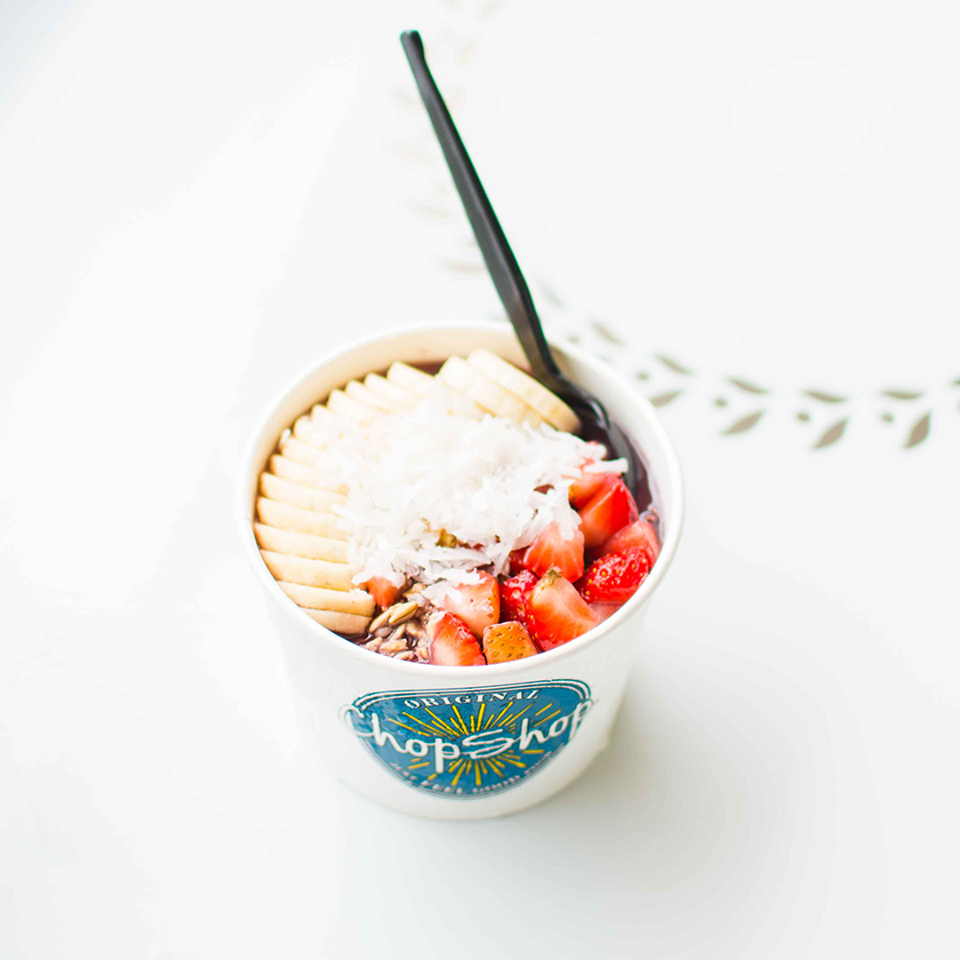 My co-worker who joined me was new to the review game, but came back to the office informing the rest of our team we needed to all go back next week. We walked in to Original ChopShop expecting a pretty run-of-the-mill review, but instead, it looks like we have a chance to get a lot of people out of the same lunch rut we’ve been cursing at least a few times a week. 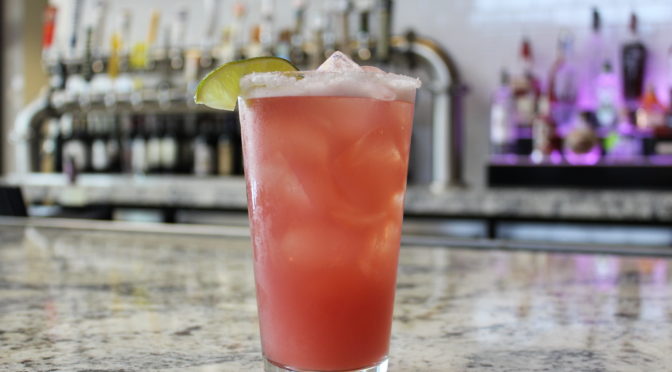 Adult children, rejoice! Pinstack has a new location off of 635 in Las Colinas.

For those of you who haven’t been to their Plano location yet, Pinstack is the modern version of a bowling alley, arcade, and restaurant, all poured into one. This new location is 53,000 sqf of fun with three main areas—the restaurant and bar, the bowling alleys, and the arcade area. Just beyond the restaurant is a 4,000 sqf patio with half of it climate controlled and the other half outside with various giant-sized lawn games. The arcade area also offers a two-level laser tag arena, a rock climbing wall, a high-ropes course, and hundreds of the newest video games and simulator technology.

For those of you who would rather watch than do, the restaurant and bar have much to offer you. I would highly recommend starting with the Mac & Cheese Pops (fried mac & cheese balls), served with a tomato bisque sauce. They’re entirely too easy to eat. 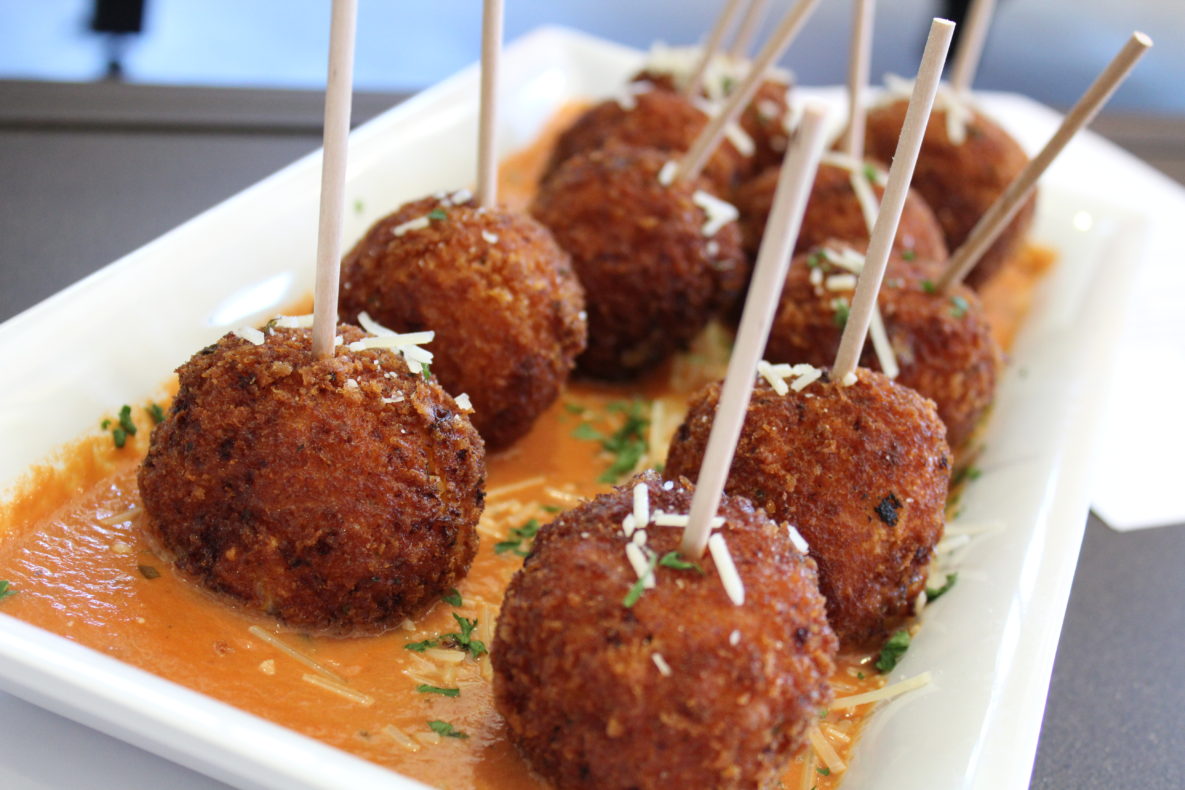 From there, you can’t go wrong with the Blackened Mahi Mahi served over jasmine rice with pineapple pico and sweet chili sauce, or the Simply Grilled Chicken served with sautéed heirloom cherry tomatoes and asparagus, baby arugula, balsamic reduction, and parmesan cheese.

This wouldn’t be a complete review on this site without some cocktail info, so be sure to give their signature Paloma a go. This classic cocktail is refreshing and delectable … really, it’s a perfect way to cool down after a heated game of laser tag. They also offer domestic and craft pints (quite a few of them on draft), house wines, and margaritas 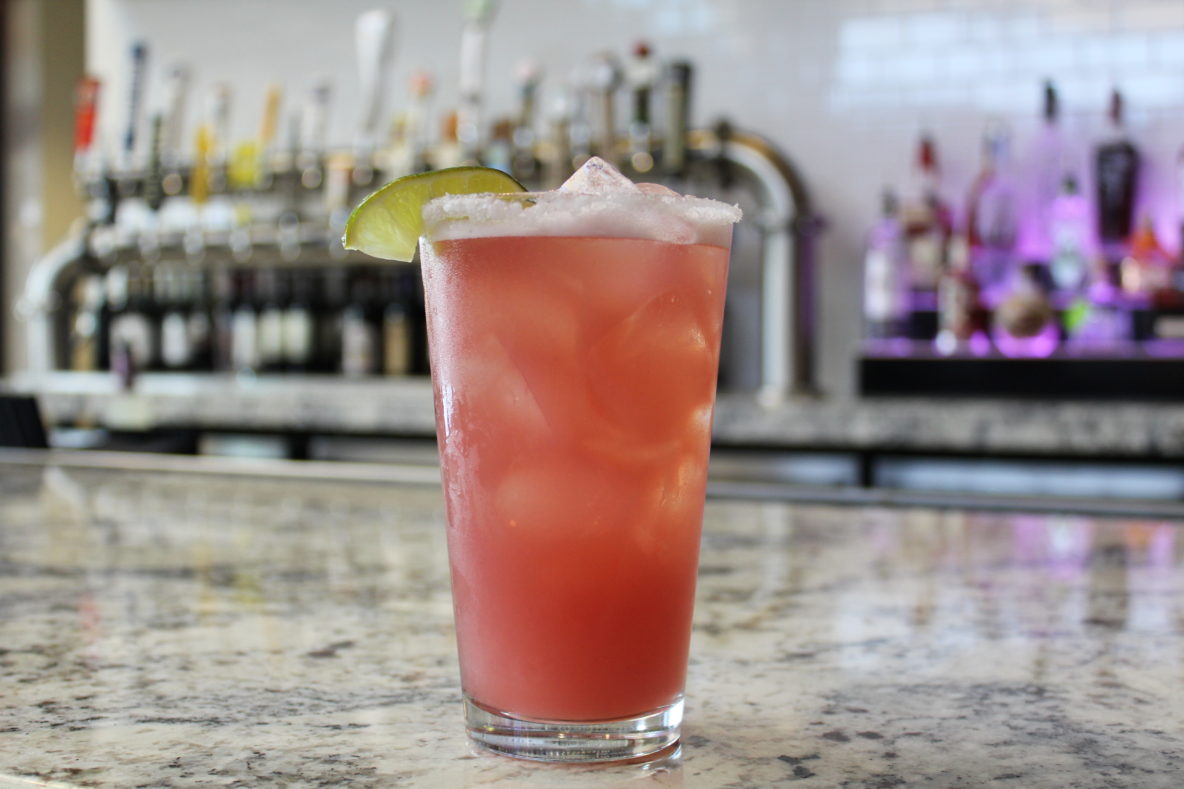 Happy hour is Monday through Friday, 4-7pm, and features specialty pricing on cocktails, beer, and wine! They are also offering specials on Mondays and Wednesdays: their Monday night special, dubbed Bowl & Bite, offers $3 draft beers and 1/2 price appetizers. They also have Wine Down Wednesday with 1/2 off bottles wine!

This particular Pinstack location can accommodate up to 1,800 guests with an inviting layout for private parties and events.

So what does one do when she misses the check-in threshold for luggage when flying out to a family reunion?  She gets a later flight and posts up at a bar … because flying after a couple cocktails is just better.

The staff of the DFW Airport TGI Friday’s is kind of amazing.  Rodney and a couple nice ladies greeted me and found me a nice little perch at the bar.  Rodney was one of those people that had a line for everything … and he had a few choice ones he dropped during our conversation. 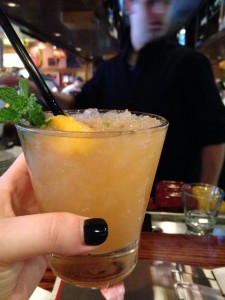 Landon and Chris were the barmen making things happen on this particular Friday afternoon, and they were quite friendly and accommodating.  I started with one of my favorites, the Peach Honey Smash (Jack Daniel’s Whiskey, Jack Daniel’s Tennessee Honey, fresh mint, peach purée, citrus juices, peach slice).  It’s perfectly sweet, but not too much so.  I could easily drink about ten of these, but then I’d end up pulling a David Hasselhoff … and that’s not a good look.

I made friends with the people around me, shot the shit, and ended up buying a round of Fireball for a few of us before ordering a Pick Three-for-All for myself.  (Don’t judge … I was on vacation.)  I went with the boneless buffalo wings, mozzarella sticks, and the pretzel sticks with cheese dip.  While indulgent, it was frickin’ delicious and hit the spot. 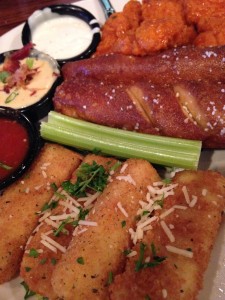 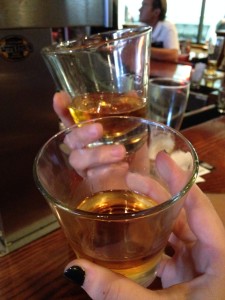 Round three was up to Landon.  He made me a delicious fruity drink (not on the menu) that was gone in about two sips.  (If you aren’t too picky … you should play my game.  I tell the bartender to make me something delicious and to stay away from tequila and grapefruit — because, ew.  I’ve gotten some really delicious drinks that I’d never think to order thank to this game!)

Anyway … best “layover” I’ve ever had.  Make it happen for yourself next time you have a few spare minutes at the airport!