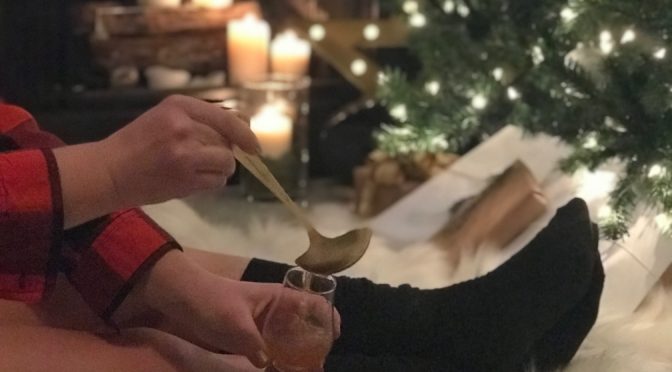 Since it’s a bit north, Scotland has shorter days in the winter; and the Winter Solstice, which we saw on December 21, is the shortest day of the year. With so much darkness, I’m sure it makes one want to cozy up next to a fire with a drink that will warm you from the inside. Scandinavians call this feeling “hygge”, which is their concept of coziness.

I’ve been a little of a Scandinavian fanatic this winter because, for some reason, I decided to reimagine my holiday decor. I went from over-the-top “Christmas threw up in here” to minimal with hints of gold and plenty of live garland. (And don’t get me started on live garland. My poor Roomba is exhausted from picking up after it.) What I loved about their holiday decor is that it’s simple and SHOULD feel cold, but it all felt cozy. I wanted to harness that feeling, but it’s hard to do when it’s 70º in the afternoon in December. So, when it finally dipped below 35º this week, I jumped on the chance to cozy up with a traditional Scandinavian warm cocktail to go with my decor.

I was excited to try my first glögg, which is a kind of mulled wine—warmed wine with spices—and curl up on a 33º night … because that’s what we in Texas call “cold”. Instead of the traditional base alcohol, wine, I opted for whisky and used a recipe from Highland Park Whisky that features its newest expression, Magnus.

The drink did its job. It warmed me up and gave me a just the right amount of alcohol to lull me into a bit of a daze. I’ll just say that I ended up taking an unexpected nap, but it was the best hour I’ve seen (or not seen, as it were) in months.

Warm up the whiskey, then add the simple syrup, lemon, and ginger. Right before boiling, turn down to simmer and add the rest of the spices and ingredients. Allow to simmer for at least 30 minutes on low. Strain and serve warm with an apple slice garnish and a cinnamon stick.