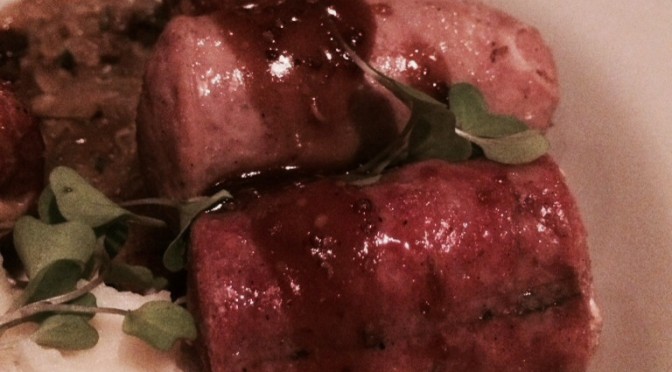 With less than two months to Addison Oktoberfest and our fearless (and never drinkless) leader Susie out of town, I was treated to a preview of Chamberlain’s Brau Haus.  A little background first…

Despite one’s inclination to think the event is aimed at adults or those interested solely in drinking beer and eating, it’s actually a very family-friendly event with a variety of activities suitable for the little ones, including carnival games, rides and music. There is even a 5K and 1 mile run benefitting Dallas-based Wipe Out Kid’s Cancer (WOKC).

On September 18-20, Chef Richard Chamberlain hosts Chamberlain’s Brau Haus, a full-service restaurant, for the second year in a row.  Chamberlain & Co. will deliver a Deutschland dining experience worthy of curing the most serious cases of the travel bug for those yearning to go to Munich … or it may make the bug bite harder. (Either way ….) A brief glance of the menu at the pre-Oktoberfest tasting event and I knew it to be wise to preemptively loosen my tie, unbutton the top button on my dress shirt, and get comfortable. (I still don’t know why they didn’t encourage us to wear sweatpants.)

The Brau Haus menu features a packed 3-course meal with Paulaner beer pairings throughout.  I was somehow able to restrain my usual tendency of partaking in a second round of table snacks typically offered at restaurants (no shame), in this case, fresh German pretzels.

Our first course included (get ready): a sampling of smoked rainbow trout with a horseradish cream and pickled onions, Bavarian ham with German mustard and a cucumber, dill and tomato salad.  Winner of this course: the trout.  It was was cooked as you would expect it to be at restaurant of Chamberlain’s caliber, perfectly.  The horseradish cream and pickled onions were spot on and seemed to include nearly all the different aspects of taste – salty, bitter, sweet, etc.

The second course featured Bavarian braised pork with onion potatoes and a paulaner jus along with a trio of German Sausages.  As if more was needed to justify my indulgence, house made sauerkraut and bacon filled up the remaining space on my plate.  Winner of the second course: the pork.  The Chamberlain’s crew served up pork that was so tender the meat seemed to gently and gracefully fall onto the fork as if yearning to be eaten.  (How’s that for meat poetry?)

It was a serious internal debate whether there was room for the warm cinnamon apple strudel top with a salted caramel sauce, but don’t worry logic and reason prevailed. (All this coming from a guy who typically eats pretty healthy.)

Tickets for the 6:30pm or 8:30pm dinner on the 18th, 19th or 20th or for Oktoberfest’s other packages need to be purchased by September 4th as quantities are limited.  The$49 Brau Haus package gets you:

Needless to say, Chamberlain’s Brau Haus dining experience should be reason enough to visit Addison’s 2014 Oktoberfest celebration.   Add to it the Draught Haus, an authentic Munich-style beer hall with a Texas twist in at the Addison Conference Center, more food and fun and there I’d be interested to know your rationale for not going.

To buy your tickets to Chamberlain’s Brau Haus or for additional event and package information, visit the Oktoberfest 2014 website.

*Many thanks to Chamberlain’s, Paulaner and the city of Addison for my meal!