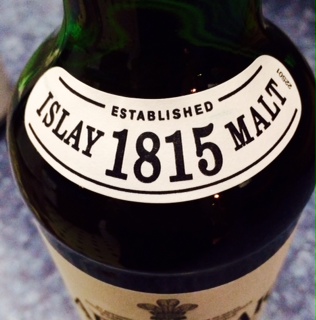 Do you know what a good day is? Getting home to find a bottle of Laphroaig 10-Year Old Single Malt Scotch Whiskey waiting for you. (Talk about a good way to unwind from a rough day.) Having had (and greatly enjoyed) Ardbeg Whisky (Scotch) before, I had a guess what Laphroaig was going to taste like. Since they’re both on the southeastern coast of Islay, part of the Hebridean Islands off the west coast of Scotland, I had high hopes.

I opened the bottle and took a quick smell, and my nose immediately picked up smoke. I poured myself a glass, neat (obviously), and took another whiff. The aroma opened up a bit and I caught the typical earthy/peaty smell that scotch from Islay often bares. (One might question what peat smells like, and I really can’t explain it. But, for those interested here is your science lesson: peat is simply decayed vegetation that occurs in natural areas. Some call those areas peatlands, but just imagine a bog. Very wet, spongy ground, that allows vegetation to decay over time.) Alright, enough science, back to the scotch. It had a heavily peaty aroma because distilleries in this area of Scotland often use peat fires to dry their grains. The scotch then takes on that smoky flavor, which is VERY distinct. The first sip brought the exact same flavor, peaty/earthy, and it was VERY bold.

I put a few ice cubes in the glass to chill the scotch, and as it chilled I noticed a slight spice to the scotch, which really complimented the smokiness. As the ice melted, I added a little bit a water to finish it off, which brought out the spices completely and really opened up the entire bouquet. While the smokiness was still the headliner of the scotch, the spices were just as bold on the finishing end of the drink.

This is Laphroaig’s original “basic” scotch, it has been distilled the same way for 75 years. I would highly recommend this as a staple in your liquor cabinet. Head to the website to see your other options from Laphroaig.

*Side note: last year SDD Contributor Rico reviewed the 2013 Laphroaig Cairdeas: Port Wood Edition. Each year, Laphroaig releases a limited edition to celebrate friendship, Cairdeas in Gaelic. Without going into too much detail that bottle went under a double maturation process in both bourbon and port wood casks to create a unique flavor. For a review of the 2013 limited edition click here.

Located at fine retail locations nationwide for around $50/bottle. (BONUS: This also includes a unique code inside each bottle that allows you to register as a “Friend of Laphroaig” and receive a lifetime lease on one square foot of land on the island of Islay, right next to the distillery. How awesome is that?)

**Disclaimer: I received this amazing bottle for free from Laphroaig**

🥃🥃 WHAT ARE YOU SIPPING THIS INTERNATIONAL W