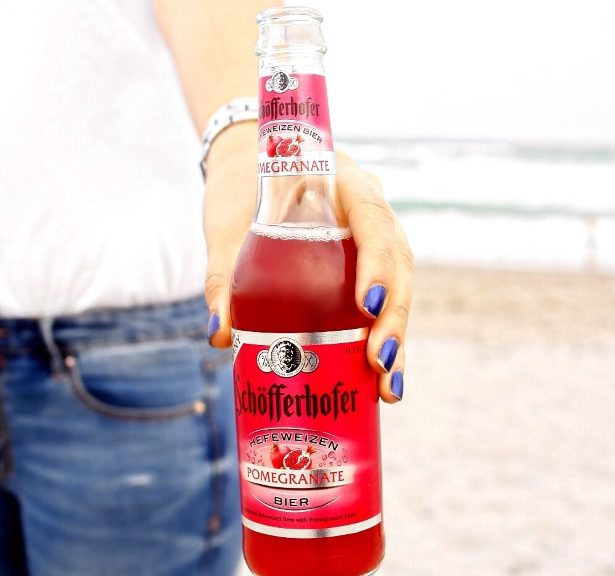 It’s starting to warm up, and when this time of year rolls around, I’m personally always looking for low calorie beverages that won’t leave me feeling put out (bloated, tired, tipsy … you name it). So, with summer right around the corner, Schofferhofer Hefeweizen Pomegranate should be on your list of fruit-forward bevs to try … and drink beside a pool, on the lake, at the beach or whatever your plans my be!

Schofferhofer Grapefruit was created back in 2007 and was super successful when it was introduced at Epcot’s Food & Wine Festival at Walt Disney World back in 2012, so they’ve been working on some new options. Now their newest edition to their fam is the pomegranate flavor!

This beer doesn’t taste like beer, and I can appreciate that for my people out there who don’t like it. (But y’all are #crazy.) I’m talkin’ like, lighter than a shandy. That being said, it’s super unique in that it’s 50% pomegranate juice, 50% hefeweizen and that’s exactly the order in which you’ll taste it too. Sweet like juice up front, mild wheat beer taste on the finish that’s not overpowering. So if you like beer that doesn’t taste like beer, this could totally be your jam.

If you do like beer, this might also be for you in the following instances:
– You want something fruity to mix it up and stay “hydrated” since it’s already 50% juice.
– You want to use it as a mixer with a seltzer water to stay even more “hydrated”.
– You want to make a punch with it by adding some gin or vodka.

You can add this beer to your cart at these DFW retailers: Total Wine, Specs, Goody Goody, Whole Foods, Kroger, Market Street, Winco Foods, Central Market, Sprouts, some other spots, and even Bed, Bath & Beyond!

So really it comes down to would I recommend it, sure, if you are in the mood for a light, fruity drink.