Kickstarter. what can’t it do? Whether you’re looking for a reboot of some random TV show by people who already have plenty of money but don’t want to risk their own or just some delicious potato salad, it’s there for you. While potato salad is great and all, someone decided that it was time to use the voice of the people to make scotch. (The team here at SDD was totally behind it.)

Carin Luna-Ostasekski took it upon herself to use her Kickstarter funds to create SIA Scotch Whiskey, a “brand for consumers who don’t even know they like scotch yet.” This is notable not just because she has entered a traditionally male-dominated segment of the spirit industry, but she is also doing it in San Francisco. I can’t do her full story justice here, but you should definitely check it out at siascotch.com.
TL:DR – creative type gets an itch to learn the ins and outs of something, works hard and creates a great spirit.

All of the media materials sent talked about how the goal of the product was to be versatile and approachable – not just the old, smoky, peaty stuff that makes some folks drool and others cringe and reach for the nearest cocktail menu. 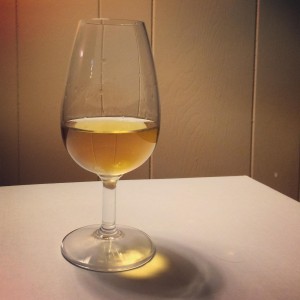 So, with this in mind (and me badly in need of a drink at the end of the work day), I poured a glass neat and took a few sips. The vanilla taste was immediate, but it sipped much more smoothly than most and didn’t finish too strong. After a few more sips, it was clear that I had a great sipping scotch. Just to see what happened, I poured a bit more and added a drop of water and the flavors opened a little bit with some toffee notes coming out under the vanilla. I also put some on the rocks and was very happy with that as well.

I was imagining a ton of cocktail recipes with each sip – especially for fall. In fact, I’m planning to revisit a few recipes at a later date, but I was so happy drinking this neat, I didn’t want to stop. And for me, that’s probably the best endorsement I can give it.

I’ll go ahead and say it … we’re dealing with a gateway spirit (in the best way possible). I’m not sure how much a scotch purist will like this scotch, but this is a perfect spirit for someone looking to bridge between the standard Maker’s/Jack/Crown frontier into something different. If you like the standard North American bourbons, I’d definitely recommend grabbing SIA on your next trip to the store and seeing if it opens your palate for the heavier end of the spectrum.

To learn how to order or find places to buy SIA or enjoy a cocktail, visit http://siascotch.com/buy/.