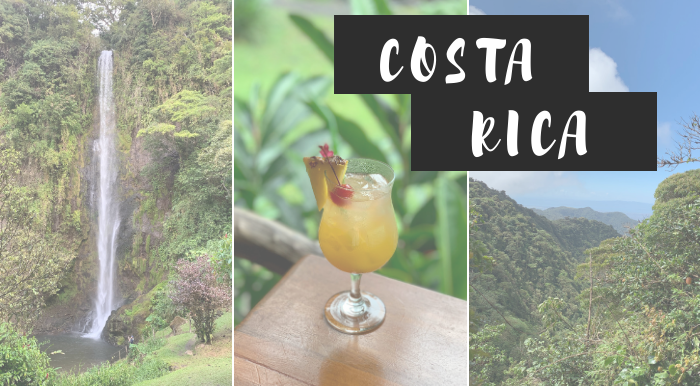 My friend, David, and I were eager to get out of town, so we made a list as long as my arm of all of our outrageous dream destinations. We finally settled on Costa Rica and planned out a 10-day, 9-night itinerary that would give us a nice tour of the country. Our planning lead us to 4 nights in Tamarindo, 1 night in Santa Teresa, 2 nights in Arenal, and 2 nights in Monteverde.

In general, Costa Rica is very tourist-friendly. Obviously, in resort areas, visitors are their bread and butter, but when you visit some of the lesser frequented areas, you’ll still find kind hosts with great recommendations on local restaurants, activities, and attractions.

Many Costa Ricans speak English, but it’s important (and respectful) to learn key phrases. Before you go, maybe try to take some lessons or even use an app to help you learn some basics. I really enjoy DuoLingo, and it’s free to use. (PRO TIP: take a friend like David who is fluent in Spanish … it gives you the chance to get a more in-depth feel of the country and the people you meet.)

You will, very often, hear the term “pura vida” from locals. They use this term that means “pure life” A LOT, and it has a lot of meanings. They say it’s more than a tagline, but a way of life.

You’ll also see “tico” or “tica” a lot. This is how they refer to themselves in Costa Rica. (It apparently comes from their use of “-tico” at the end of words to indicate something small. Though we never heard it once. ??‍♀️)

The currency in Costa Rica is the colon (colones, ₡). When we visited, it was about $1 > ₡560. Download the app Currency Converter for quick conversions. MANY places also accept US dollars, so make sure you know which you’re expected to pay with. (Most ATMs allow withdrawals in both currencies.)

We were very happy with the hotels in all of our destinations. However, be sure to check if your hotel is cash-only, as some are. Also, many hotels will advertise that they have free WiFi, but will not have access throughout the property. Some less updated hotels also cannot allow toilet paper to be flushed … so be prepared for that.

Renting a car allows you to explore more deeply. The entire country is quite hilly, and many of their roads are unpaved and full of pot holes, so getting a 4×4 SUV is going to be your best bet.

While cars seem cheap (around $4 a day), all rental agencies in Costa Rica require the driver get insurance, so it ends up about the same price as most other destinations. (A small car for us ended up around $32/day.) You can also try to rent through Turo as some agencies will rent cars through that app.

AVOID DRIVING AT NIGHT. Many Costa Rican drivers don’t stay in their lanes (literally), so it can be dangerous. Also, on the aforementioned bumpy roads, avoiding potholes can be difficult.

Gas prices in Costa Rica is regulated, so there’s no need to shop around. More so, it’s best not to shop around as gas stations aren’t easy to find. We got gas often (we never got below half a tank), just in case.) All gas stations are full service, and most cars use “super” unleaded fuel (our basic gas). Be sure to check before filling up.

The food in Costa Rica is FRESH. Make sure you get your fill of chocolate, coffee, seafood and fruit while there—the local fruit is ALL incredible and sweet, and have ceviche anytime you see if on a menu. You’ll also be given their version of limes (called mandarin limes) a lot, but they have orange centers and are much larger and MUCH juicier.

You’ll find a lot of casual restaurants called “sodas” around where you can get a full meal for about $7-$10. Make sure to pop into at least one for a traditional meal. You may also see “chicharronarias”, which are casual restaurants serving chicharrones (pork). Do yourself a favor and have a meal at one. You may have to point to order, but I promise you it’ll be worth it. (A to-go order I took back to our hotel might have been one of the best three meals of the entire trip.)

If you go on a fishing excursion, make sure to find a place that will cook it for you. Many restaurants will prepare your catch for you however you’d like it cooked for a certain price per person. (We had our hotel prepare our skip jack tunas and it was $18pp and included three sides and a couple dips. We asked had half grilled and the other half blackened.)

Plantains: a banana-like fruit that is often roasted or fried

Casado: a plate of traditional CR items (beans, rice, salad, etc.) and your choice of meat

Pork: they LOVE pork, so you’ll find it served all different ways … lucky you.

Guaro is the Costa Rican’s vodka. Distilled from sugar cane, they use this clear, mostly flavorless liquor often in many “vacation drinks” and in their typical drink, chile guaro (a Bloody Mary-like drink).

Their “national beers” are Imperial and Pilsen. You can find Imperial in the original brew, light, and silver (the same as the original, but in a clear glass bottle instead of in a brown bottle, which allows in less light). Pilsen is an almost amber ale, similar to Imperial but with a slightly higher ABV, and we were told by our boat captain that only tourists drink Imperial … so we jumped on the Pilsen bandwagon for good! Most bottles of beer will run you around ₡1.200 (~$2.50)

Most bars also had local beers available, so get nuts and try some. We visited the Arenal Brewery to break up one of our drives, and really enjoyed it.

THINGS TO DO (Coming Soon)