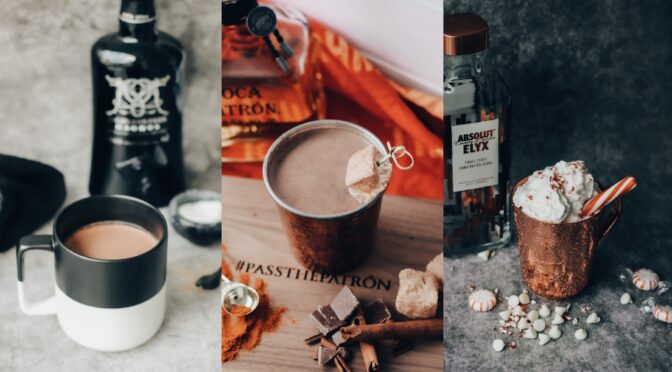 Dallas didn’t get too cold (yet) this year, but on the days it has, I found myself craving something warm and boozy. Once I had gotten past my hot toddies and it was too late in the day for an Irish Coffee, I turned to hot chocolate cocktails!

I put together a few different spirited options for y’all … from the traditionally spiked vodka, then went to tequila and scotch options. Because it’s always fun to try something different, right? 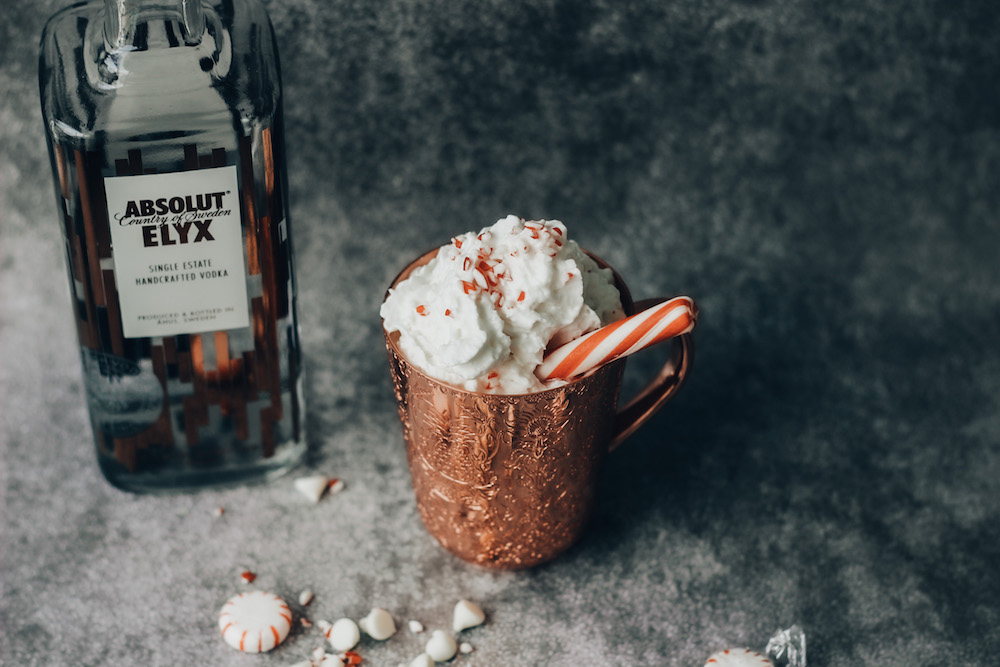 Add chocolate and milks to a medium saucepan and summer, stirring constantly, until chips are melted. Once melted, remove from heat and add vodka. Top with whipped cream and peppermint pieces, if desired. 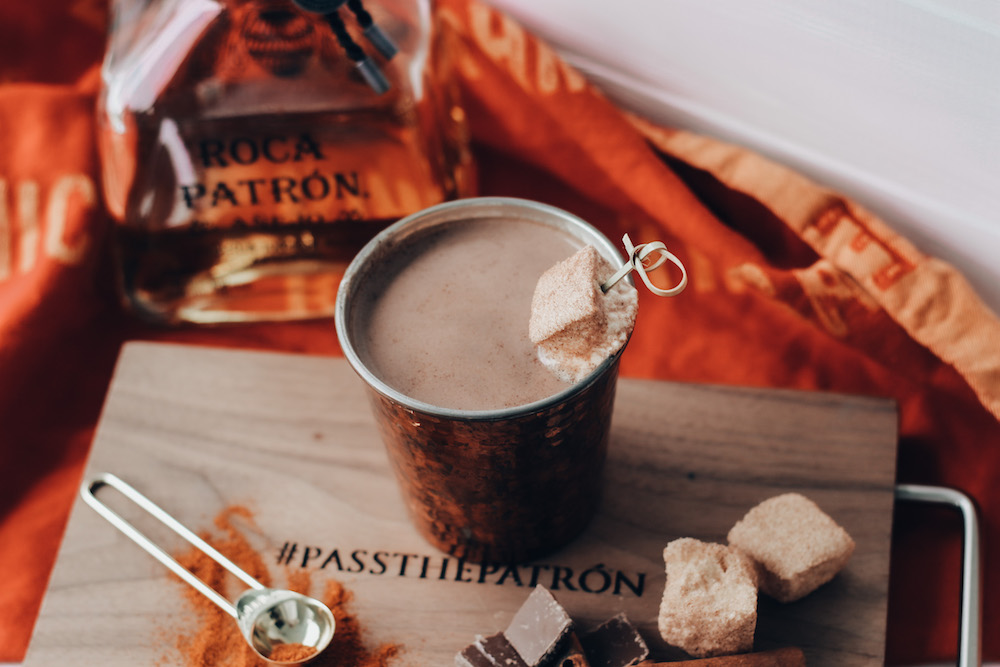 Combine all ingredients (except for tequila) to a saucepan and whisk until combined. Heat on low until it’s slightly boiling, then remove from the stove. Add tequila, then pour into mugs and top as desired. (I added cinnamon marshmallows and a pinch of cayenne pepper on top.) 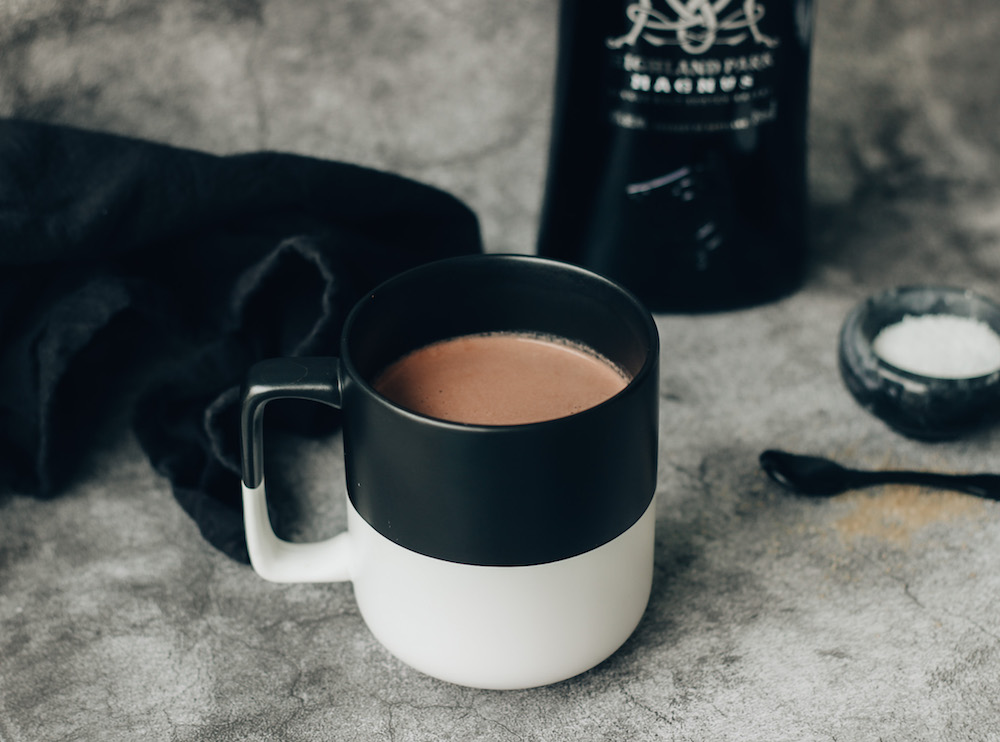 Combine all ingredients (except for whisky) to a saucepan and whisk until combined. Heat on low until it’s slightly boiling, then remove from the stove. Add whisky, then pour into mugs and top as desired.

… you can also whip up my famous HAUTE CHOCOLATE and add whatever spirit sounds good to you.

Either in a crock pot or a large pot, whisk cocoa powder with hot water until mixed. Add in chocolate, milk, heavy cream, evaporated milk, and pinch of salt. If using a crock pot, cook for at least 2 hours on high OR low for 4 hours and stir occasionally. Keep on warm to serve.
If using a pot on the stove, heat for about 15 minutes on medium and stir often. Then, keep on simmer and continue to stir occasionally.
Makes about 20 servings.

*the higher the fat content of the milk you use, the richer your drink will be 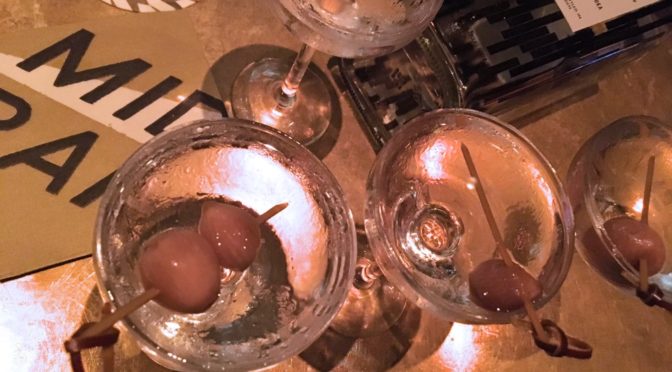 Hi, my name is Tiffany, and I’m a cocktail onion addict.

Whew! There, I said it. It was love at first sight – I remember that night so clearly: My friends and I were sitting in a dimly-lit corner of a New Orleans restaurant during Tales of the Cocktail and were primed to order our first round of drinks. Our local Absolut Elyx brand ambassador, Kyle Paris, was with us and suggested that I try the Gibson martini, and I’M SO GLAD I LISTENED TO HIM. (He knows things sometimes.) I love me a well-made dry martini, but when you garnish it with a crunchy, briny, house made cocktail onion? Game over. Take me away.

What I couldn’t believe was how long it took me to eat my first ever cocktail onion. In all honesty, I vaguely remember seeing the little pearls on various bar tops, but it never occurred to me that they were briny. I always thought they were raw, and I’m definitely not a fan of eating raw onions. Yuck. However, now that Kyle had set me straight, I had so many questions. Why have my bartender buddies been withholding this pickled treasure from me? Do all of my favorite bars back home have cocktail onions? If so, do they make the cocktail onions in-house? Am I the only one with whom Kyle shared this brilliance?

My Dallas Gibson cocktail discovery mission had a rough start.  I had the unfortunate incident of receiving a Gibson that was garnished with cocktail onions from the bottom of a very large, very old-looking jar. (The bar name will be withheld to protect the not at all innocent.) To say the least, it was an unpleasant experience – the onions lacked the freshness and crunch that I enjoyed so much with my first Gibson. I learned a paramount lesson that night: Store-bought jarred cocktail onions be gone. Say it with me: House made garnishes only!

That’s when I partnered up with Kyle to organize the first ever (as far as I know anyway) Absolut Elyx Gibson Tour. We reached out to some of our favorite bartenders around the city to see if any would be interested in coming up with their own cocktail onion recipes. As it turns out, many of them were.

Five bars.
One night.
Six friends on average at each boozy stop.
Who knows how many Gibsons to consume.

The Absolut Elyx Tour was officially on.

Our first stop was in the ‘burbs at Vicini Frisco. Barman Brian McCullough served up some delightful Elyx cocktails with his variation of the cocktail onion – pickled spring onion bow ties. I really enjoyed Brian’s version; it had welcome, grassy notes, the familiar brininess, and a touch of whimsy. What’ s not to love? 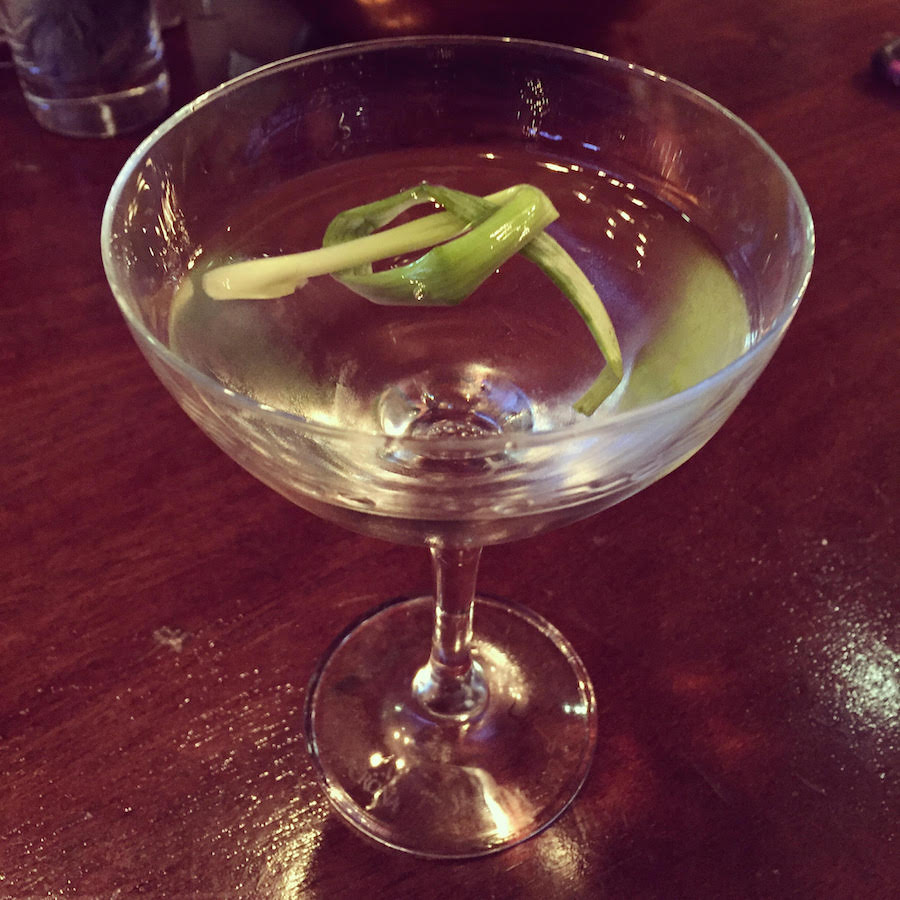 From Frisco, the Tour braved Friday rush hour traffic all the way down to Bishop Arts District to pay Boulevardier a visit. This popular restaurant/bar is one of the few spots that already make their own cocktail onions. Ashley Williams made an excellent classic onion garnish; so excellent, in fact, that I enjoyed six of them. (Two onions per cocktail, carry the three … you do the math.) 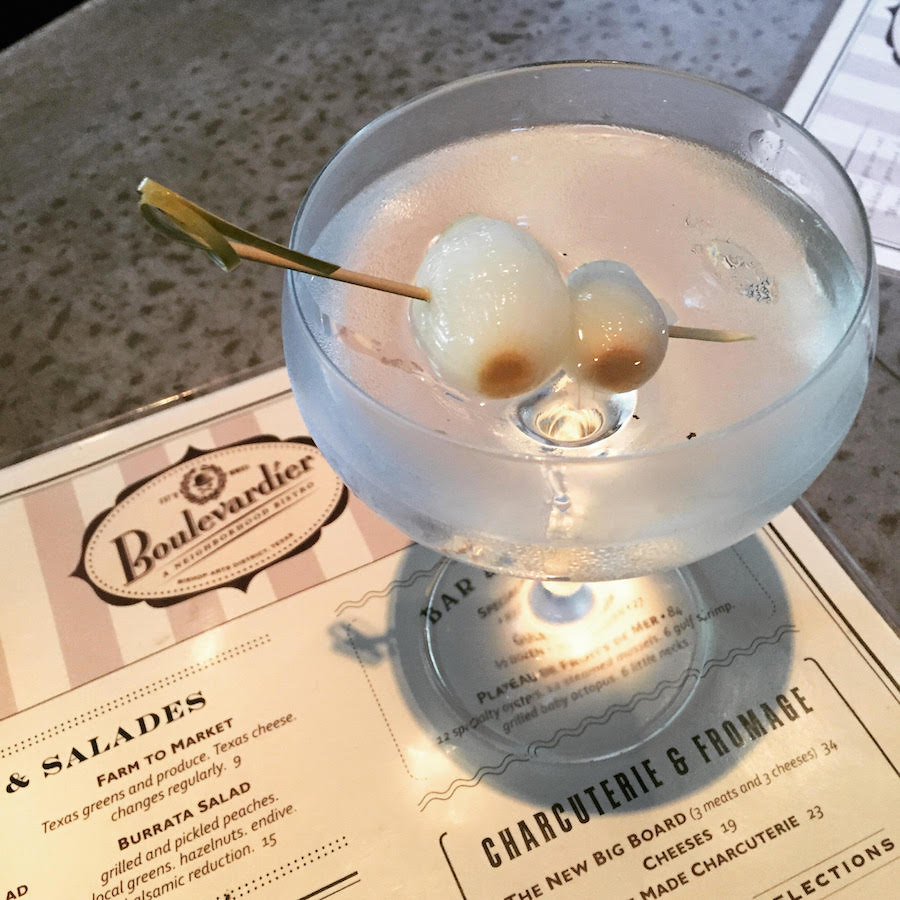 After two delightful stops, the Tour was starting to hit its stride. From Boulevardier, we Uber’d our way downtown to The Mitchell where they offered not one but two cocktail onions to sample that night, one in a “garden brine” and one made with hatch chilis. I’m a bit of a spice wimp so I steered clear of anything marinating in a hatch chili situation, so I opted for the garden variety. Without hesitation, I popped the onion in my mouth, anticipating a deliciously briny vegetable medley. What I got instead was a mouthful of sharp, raw onion. Oh boy, that was surprising. No kissing for me that night for sure. I downed the rest of my Gibson to alleviate the biting flavor. 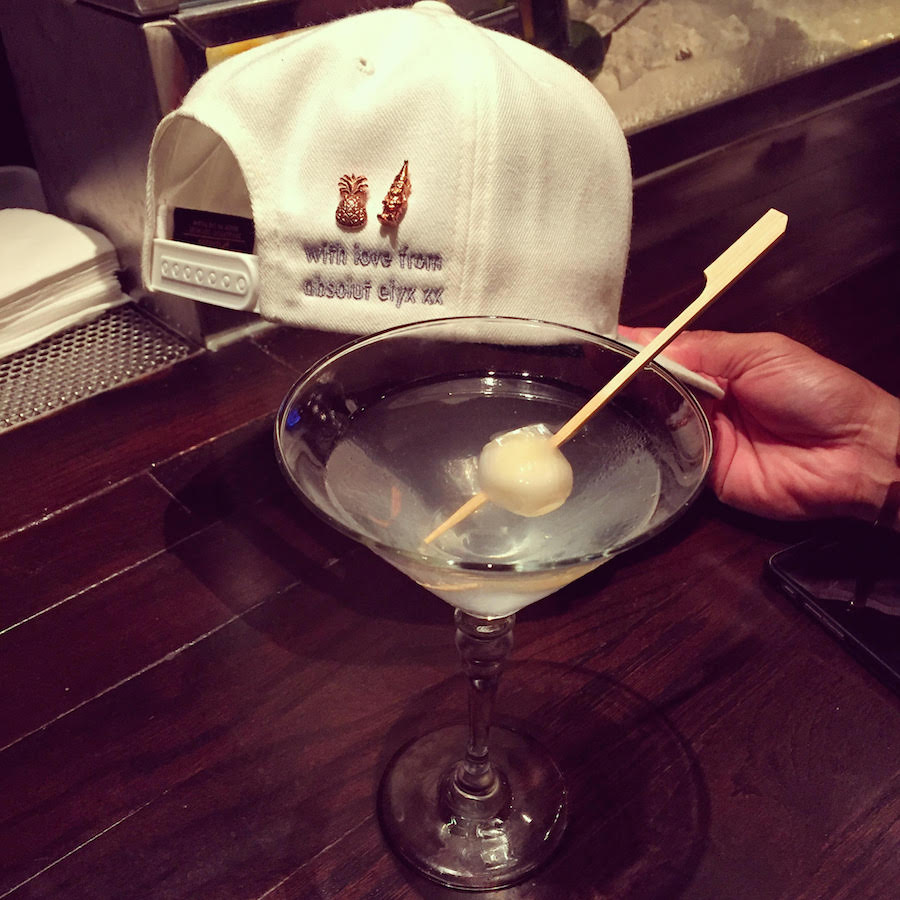 Without hesitation, the Elyx Gibson Tour soldiered on to a tried and true spot down the street, Midnight Rambler. They garnish their Gibson, The Silvertone, with a mighty fine and smoky chipotle onion, to which I was no stranger. The Elyx was flowing and skewers of golden brown onions perched on about half of the cocktails on the bar top for a solid hour. This was the 4th stop on the tour and the group was feeling gooooooood — and Susie had finally joined us. (A little tardy to the party.)

By the time we made it to the fifth and last stop of the night, most of our friends had already bid us farewell. So then there were the final four.

We approached the bar at High & Tight, excited to see what our favorite bar-behind-a-barbershop’s man behind the stick, Austin Gurley, had in store for us, and I am so happy that we made it to the last stop. The cocktail onion was so surprisingly flavorful, with citrusy notes of grapefruit and a spicy, peppery kick. It was by far our favorite of the night!

The Elyx Gibson Tour proved a success, and what kind of cocktail onion addict would I be if I didn’t try to cover more ground? A few days after the tour, I visited Hugo Osorio at The Theodore to sample the onion batch he prepared. The onions were wonderfully balanced with crunchiness, brininess, and jalapeño spiciness … so yeah, pretty much cocktail onion heaven. 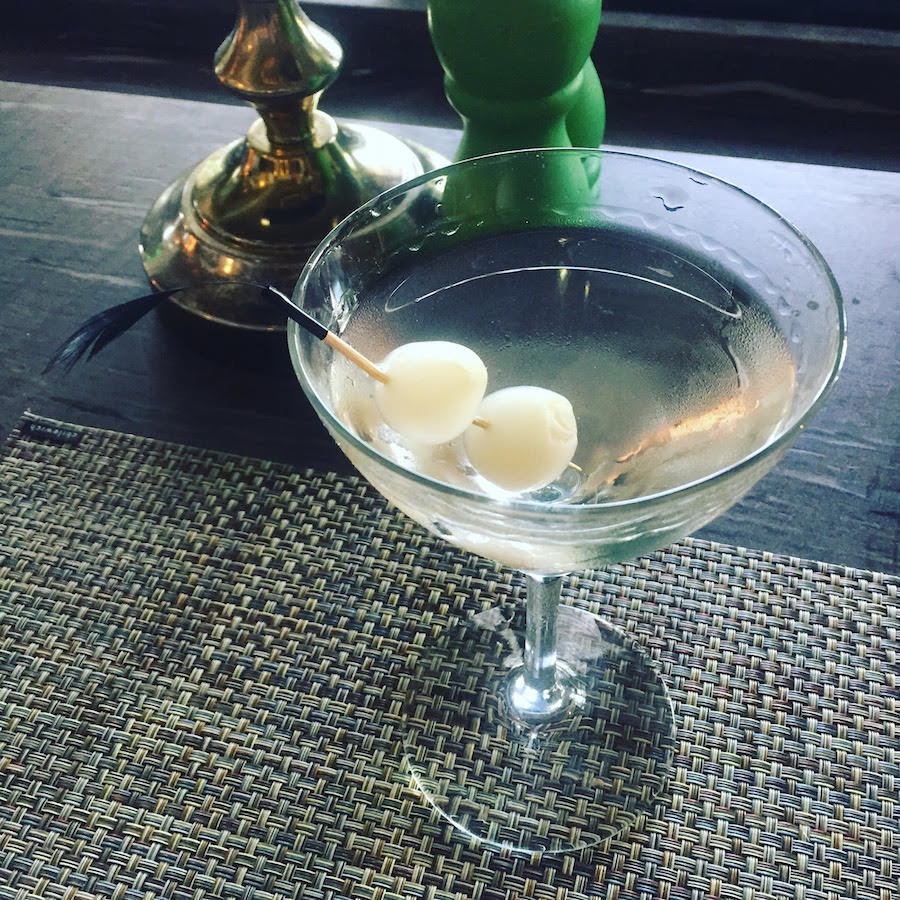 This last Gibson falls outside of the Dallas area … like, really far outside. But, due to its Absolut awesomeness, it had to be included. A few weekends ago, I went to Chicago and had the pleasure of ordering the Elyx Gibson off of Vol. 39‘s brand spanking new cocktail menu at The Kimpton Gray Hotel. As far as I was concerned, it was kismet. The cocktail onion had bursts of Chinese five-spice and red wine vinegar. It sparkled atop my glass like a garnet jewel. If you ever find yourself in downtown Chicago, don’t think twice before visiting this bar. Thank me later.

I write this in hopes of drawing out existing Gibson lovers and converting the Gibson-ly ignorant into cocktail onion enthusiasts. And then, maybe one day, this particular tipple will experience a comeback of Old Fashioned’s proportions. A girl like me can dream, right? In the meantime, if you’re curious about trying out the Gibson for yourself, give me a call. I’m always down.

SPECIAL THANKS TO ABSOLUT ELYX FOR HELPING US MAKE THIS NIGHT HAPPEN! 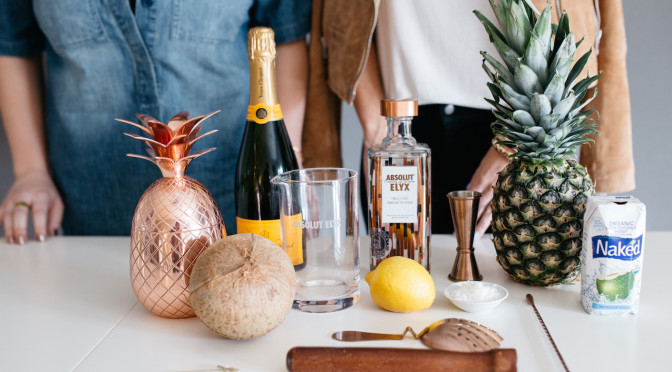 I have some really fun friends. I thought the other day that it’s a damn shame that I don’t get to show them off more. Enter: #DrinkingwithSusie! I’ll be hanging out with some of my foodie/fashion/fit friends to bring you fun recipes and introducing you to some Dallas movers and shakers. Stay tuned for more next month!

My first #DrinkingwithSusie victim is Natalie Keinan. I was lucky enough to meet Natalie about a year ago and knew we would be great friends right off the bat because, well … we both love happy hour. Natalie runs the popular fashion and happy hour blog, The Fashion Hour–a lot of fashion and a little booze! 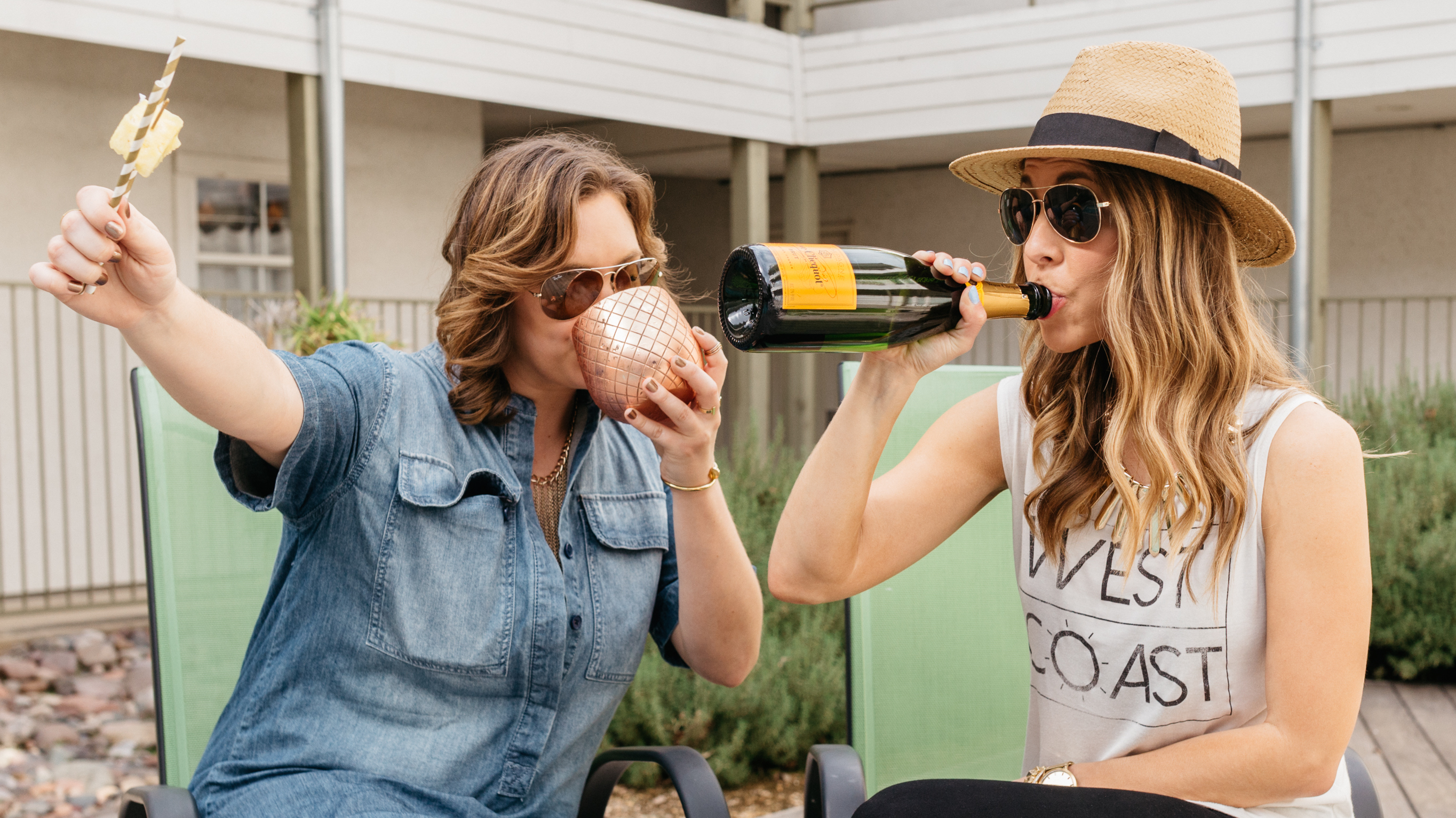 When we got together to make our cocktail, she had requested the following: no tequila, nothing bitter, and something light and refreshing. Oh, and it had to have champagne in it … and she wanted to use the copper pineapple I’d given her for Christmas. (The pineapple just happens to be a part of a gift set offered by Absolut Elyx, and for every one sold they donate a week of clean water to people in need!)

So, what did I come up with? A lotta bit of Elyx, a little coconut water, and plenty of champagne. (And that’s how life should be.)

Either shake or stir the Elyx, coconut water, lemon, and syrup with ice until chilled. Fill pineapple with fresh ice and strain contents over ice. Top with sparkling wine and garnish with coconut shavings. (Bonus: mound shaved ice on top of cubed ice.)

Protip: when pouring the champagne into the pineapple, since it’s opaque, it’s hard to see when the level rises and the sparkling wine can bubble over. To avoid spilling, pour slowly.

[slideshow_deploy id=’10241′]
How and when did you decide to start The Fashion Hour?
I created The Fashion Hour in October of 2013 after kicking the idea around for several months and doing a lot of googling. I started it as a creative outlet from my job in corporate America where I would share good deals on clothes I found along with my favorite happy hour spots. It has grown quite a bit since then but both of those topics are still the core of what I write about! 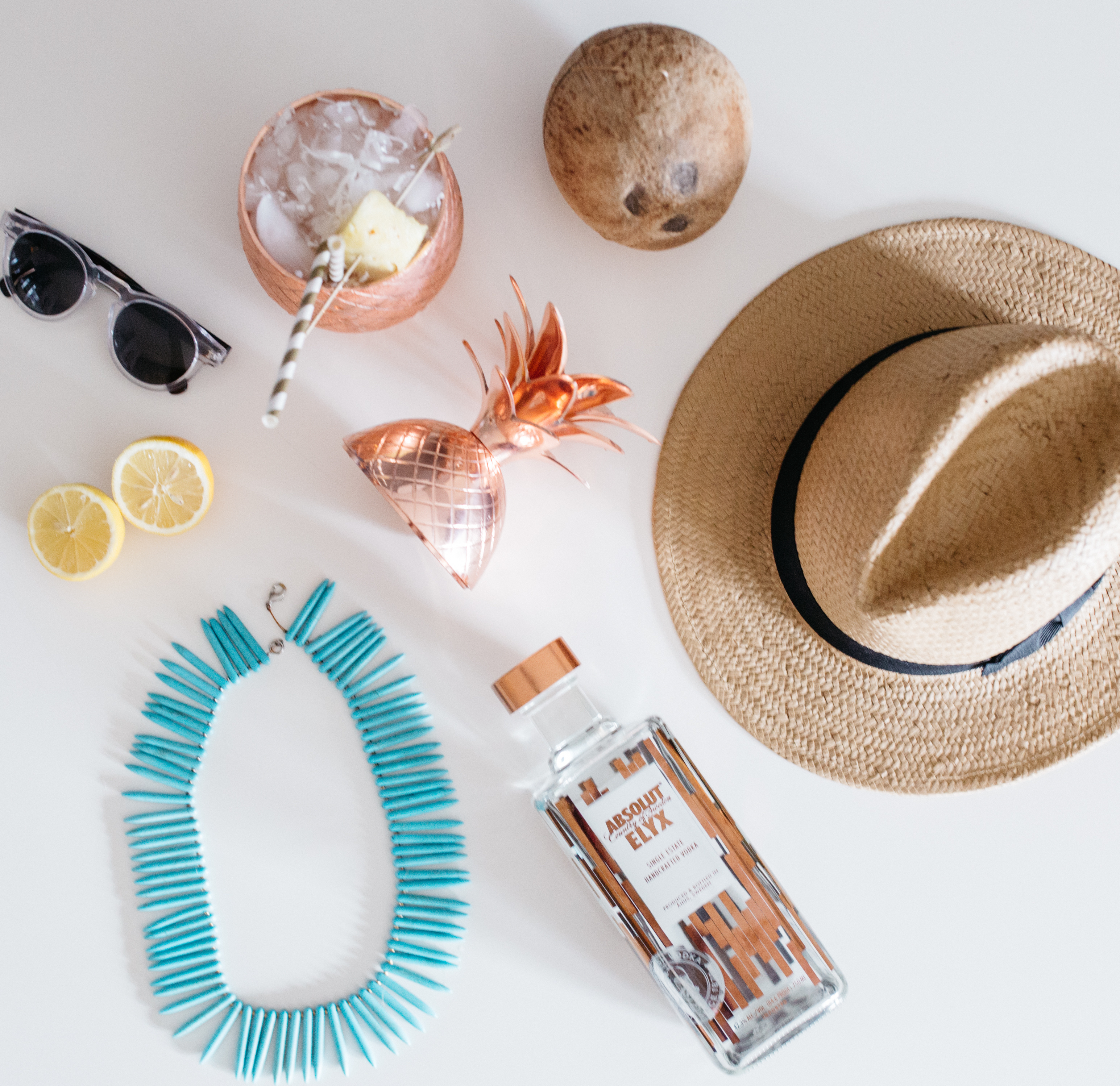 What clothing trends do you see being hot this spring?
Anything off-the-shoulder, frayed denim, necktie scarf/bandana, overalls, fringe, pom poms … is that too much? I also think we are going to see more people investing in replica pieces. It can be all too easy to assume that your favorite designer pieces are just out of reach. However, nowadays, there are some brilliant replica websites like LuxuryTastic where you can find replica pieces based on all the latest designer items. I was actually introduced to LuxuryTastic by a friend of mine who showed me this Luxurytastic review. Feel free to check it out for yourself. Who knows, you might even find a replica alternative to some of the must-have pieces for this spring. 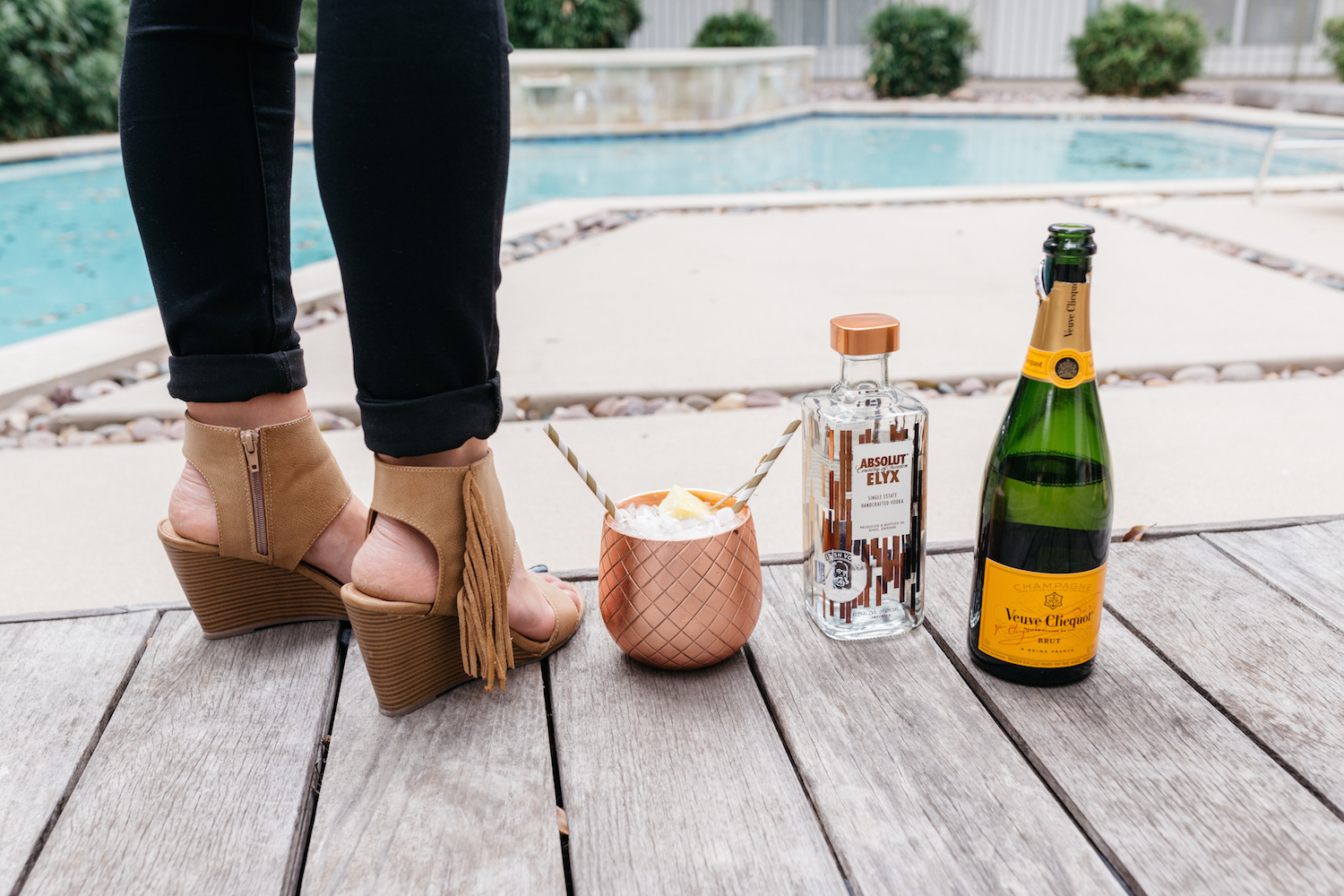 Where is your favorite happy hour in Dallas?
That is HARD. There’s just so many so it’s impossible to choose a favorite, but I am pretty excited about the new House of Blues patio. Who doesn’t love food and drink specials before a show?!

Follow Natalie around Dallas (and some other fabulous destinations) for her style tips, sale scoops, and, from time to time, boozy recipes! 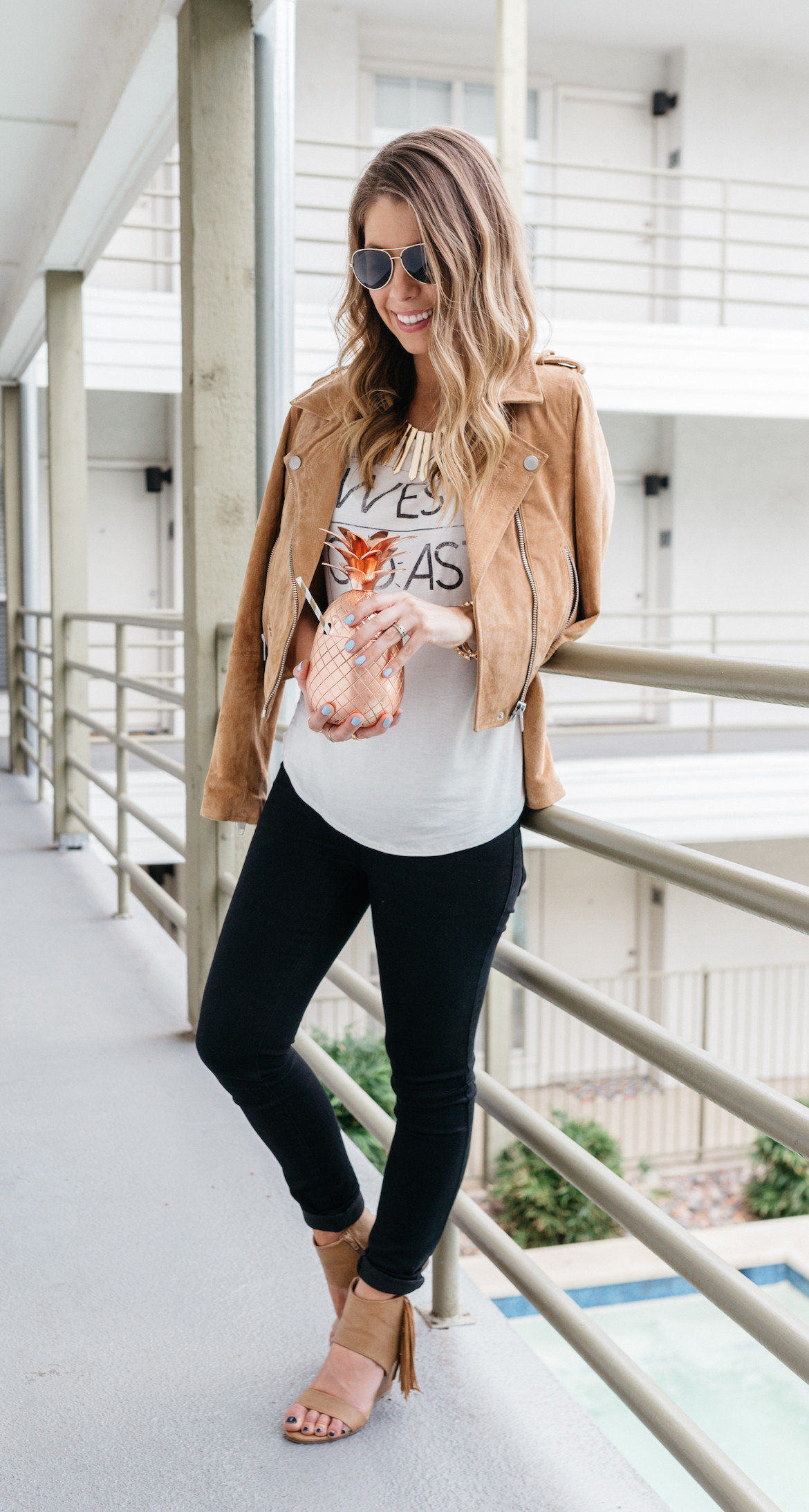 🥂 CHEERS TO STAYING IN? 🥂 So who’s going