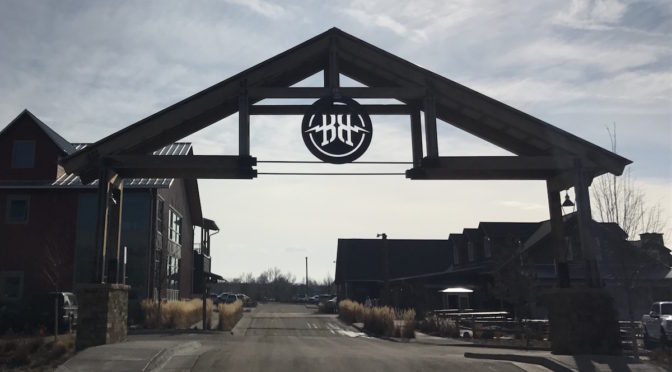 In anticipation of the upcoming Breck Trek nights in Dallas this week, I stepped in to the actual Breckenridge Brewery for a pint and a tour. The state of the art brewery recently moved to a brand new facility in the Littleton neighborhood of Denver, Colorado. The beautiful mix of industrial metal and rustic wood creates the perfect atmosphere for beer connoisseurs and curious minds alike to enjoy an afternoon learning about the beer making process. I may not know much about beer, but the smell of the brewery alone was enough to make me want to start home brewing. 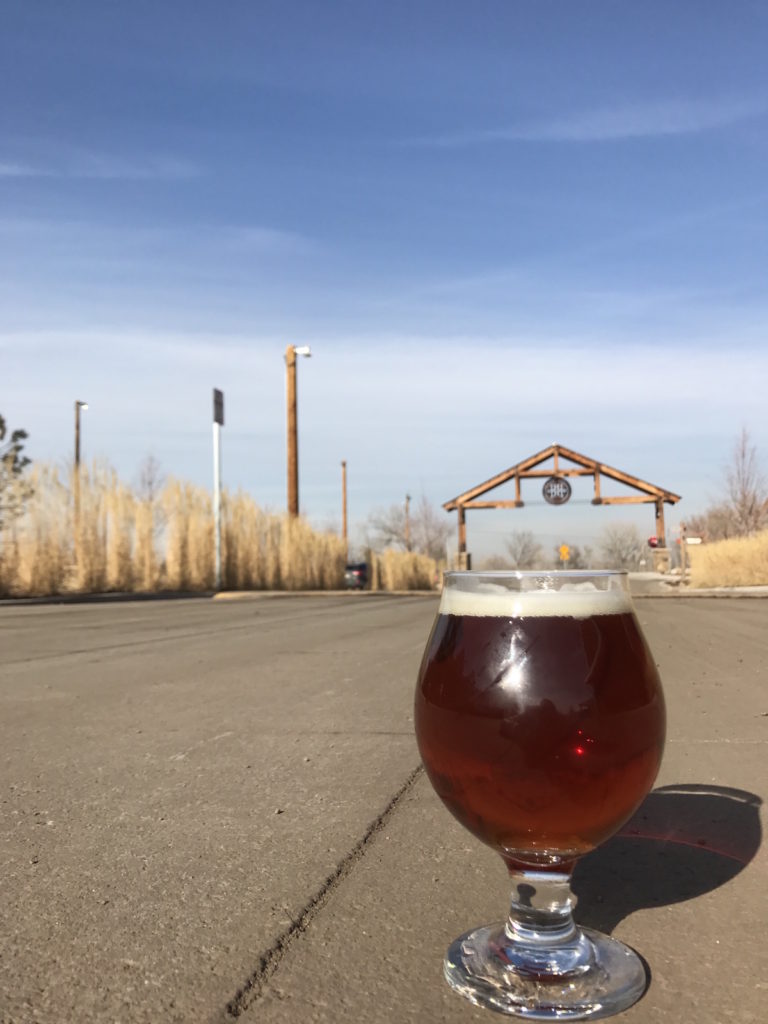 I started the tour with a nice glass of the Bumps N’ Jumps Session IPA, which is an exclusive and limited collaboration between Breckenridge and Vail (two awesome CO ski resorts). It accompanied the tour beautifully with light bitterness and full hop flavor. We then learned about the German-engineered tanks that are used in the facility the process and some of the things that make Breckenridge Brewery unique. My favorite tidbit was the fact that all of the spent grain (grain that the brewery no longer needs, which has been separated from the sugary liquid that will eventually be turned into beer) goes directly to a local farmer to feed his cattle. Efficiency, people. 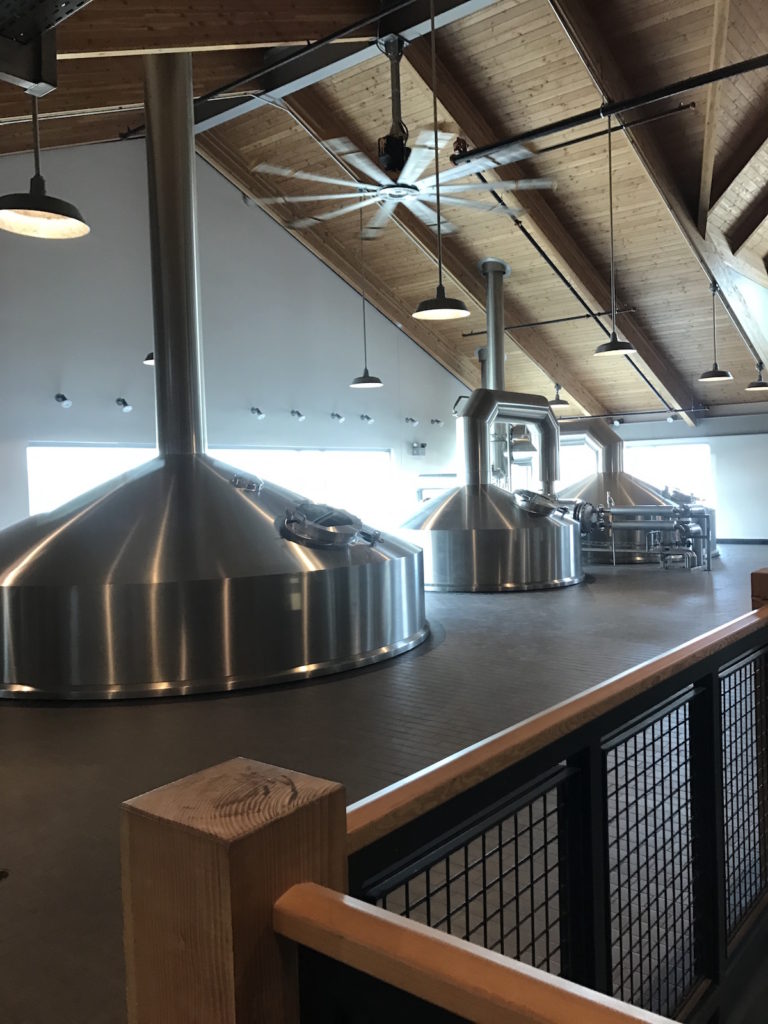 The best stop on the tour was the barrel room, where all of the barrel-aged beer is stored for a period of time to absorb the taste and smells of the barrels themselves (much like aging a spirit). This room smelled like HEAVEN. The aromas of wood and rum and vanilla all played so well together that I refused to leave. They have several beers on rotation through the barrel room, but one beer that they always have available is their Whiskey Barrel Aged 471 Double IPA with Citra hops, which gives off aromas of tropical fruits and citrus flavors. 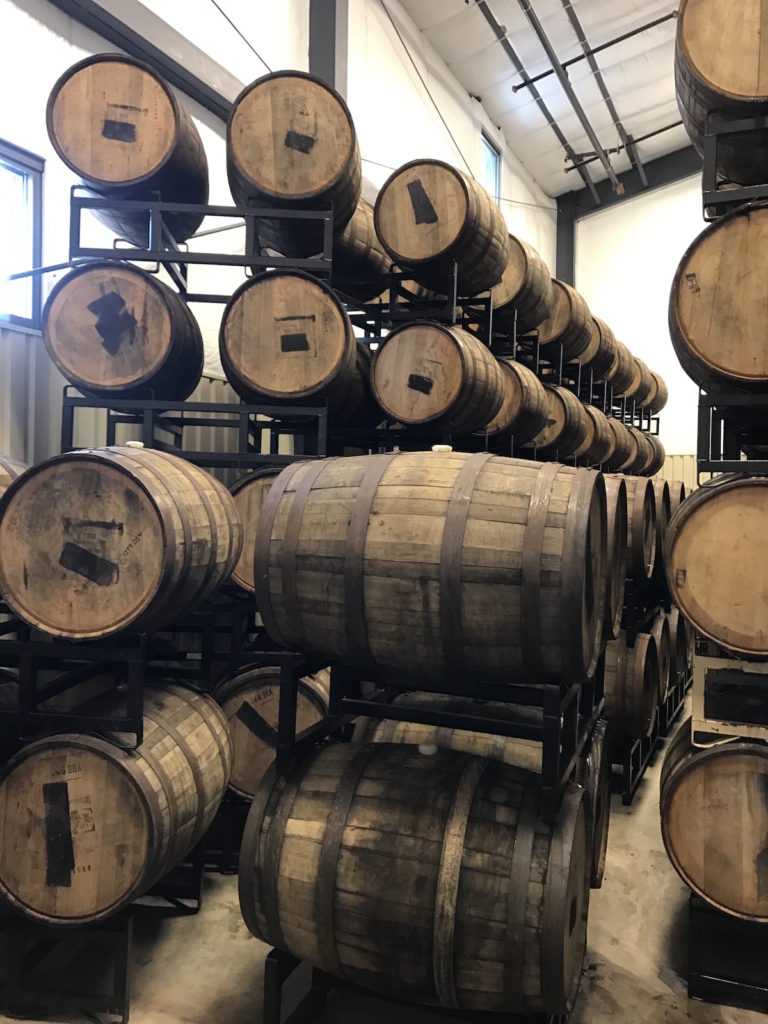 You may think that a brewery tour is all there is to do at the Breckenridge Brewery … EHHH! After the tour, I got to indulge myself in lunch at the Farm House, their on-site restaurant. Rustic rocking chairs, plush and comfy seating, and a stone fireplace provide for a mountain-esque ambiance. We started our meal with—what else—a flight of beer. Up for review was the Nitro Orange Chocolate Stout, the Break IPA, the Ophelia Hoppy Wheat, and the Whiskey Barrel Aged 471 Dry Hopped with Citra IPA. All were delicious and has citrus-y flavors, but my favorite was the Ophelia for its lightness and Mosaic hops.

Up to the challenge of satisfying my hunger were several plates, which we shared as to try the most items. We chose the chicken pot pie, the venison chili mac and cheese, and the salmon with risotto and asparagus. I don’t know which I enjoyed more because I didn’t stop to breathe between bites … everything was that good. As for desert, and my stomach said “no” but my eyes and my head said “OH YEAH, BABY. You have months before bathing suit season.” Guess which won? We indulged anyway and ordered the Apple Galette, a warm apple pie/strudel served in a cast iron skillet and topped with house-made vanilla porter ice cream.

This experience was the perfect lead in to the Breck Trek tour, which will be traveling across the US to give the other states a taste of the Colorado lifestyle. Live music, beer education, and of course Breckenridge Brewery beer sampling will occur at every stop on the tour. The Breck Trek will hit Dallas the week of January 16th, check out times and locations here. Each month, Cook Hall teams up with a regional brewery to create a menu pairing of intense flavors that highlight the buzz-worthy notes of select beers. If you have a beer keg, why not look into getting Custom tap handles for your beer keg! The dinner encourages community members to come together like an intimate gathering of friends and learn about the craft behind some of the best brews in town. For the month of April, Cook Hall joined forces with Saint Arnold Brewery to create a menu pairing of five courses that appealed to individuals of all palates and cravings.

Upon arrival, guests were greeted with the Weedwacker, a Bavarian Hefeweizen. This light beer has notes of spicy clove and banana esters that come from different yeasts. Saint Arnold’s only unfiltered year-round yeast, Weedwacker embodies a pale malt barley with a dash of malted wheat. Accompanied by a frisee salad with pickled peaches, this course was a light start to our indulgent meal. Next, came the Elissa IPA, an authentic version of traditional Indian Pale Ale. The huge hop additions in the kettle give the beer a bitterness that is then dry-hopped in the fermenter to create a floral, hoppy nose. The maltiness comes from British Maris Otter malt. The citrusy flavor of the brew goes perfectly with any seafood, which made its pairing of Grilled Swordfish and Orange Vinaigrette an obvious choice. Course three included the Icon Brown Porter with Kalbi Beef Short Rib Tacos. The Brown Porter is a dark, medium bodied ale with rich chocolate malt notes and an aroma mix of chocolate, nuttiness, and coffee. The tacos were a hit across the restaurant, as many platters were wiped clean before the course presentation was even done. Add a dash of Cook Hall’s special hot sauce and this meaty treat washed down easy with the Brown Porter.

At this point, individuals began unbuttoning their top buttons, shifting in their seats, and doing whatever possible to make room for the two remaining courses…amateurs.

My stomach waited the entire night and was fully prepared for the moment the Rack of Lamb and Divine Reserve #13 graced our table. This Belgium brew has a relatively simple malt bill with caramel and chocolate malts. A large amount of Belgian Extra Dark Candi Syrup is added during fermentation, which gives it a dark fruit-like flavor and boosted alcohol level (WIN!). All tableside manners were tossed at this point as I traded off between going at the lamb like a chicken wing and guzzling down the rich Divine Reserve.

Lamb is hard to beat in my book, but the grand finale was no letdown. Each guest received a plate of Warm Sticky Date Toffee Pudding with Coconut Sorbet and the Bishop Barrel #5, Bourbon Barrel Scotch Ale. The Bishop Barrel begins as the Divine Reserve No. 4, gold medal winner at the 2008 World Beer Cup in Strong Scotch Ale category, which include tasting notes of caramel, toffee, dried figs and cocoa. Aged in a bourbon barrel, the base mixes with flavors of vanilla, cinnamon and a touch of pipe tobacco to create a rich creaminess. Directions for this course are as follow: take a heaping scoop of sorbet with equal parts of toffee pudding, shovel in your mouth, and immediately guzzle gulps of the Bishop Barrel. The result is perfection.

Bennette Frugé of the Saint Arnold’s brew crew led us through the tale of each selected beer and menu pairing. Known to many as Flappy for his ever-flapping lips and ability to talk for hours about his love of beer, Bennette lived up to his nickname. Between jokes and jeers with the crowd, Bennette highlighted many interesting facts for beer connoisseurs and newbies alike. My favorite fact may just be that if he could be an animal, he would be a pterodactyl.

Saint Arnold Brewing Company, located in Houston, is Texas’ oldest craft brewery (and is reportedly haunted). Founded by Brock Wagner and Kevin Bartol, the first keg was shipped on June 9, 1994. Brock, a longtime home brewer, always considered opening a brewery as far back as college, but didn’t go through with the idea until seven years after graduating. Enlisting Kevin, the two chose Houston because it was the largest city in the country without a microbrewery. The small crew brews, filters, kegs, bottles, sells, and drinks each beer to ensure the best quality. Brews are distributed and enjoyed throughout Texas, Louisiana and Colorado.

Cook Hall’s next beer dinner features Harpoon Brewery on May 23 for $55 a seat (and a certain drink blogger whose name rhymes with boozy will be in attendance). Grab your friends or go alone; either way you will take part in good food, good brews, and good company.

PSST – there’s a new kid in town.  Revolver Brewing is opening in Granbury, TX next Saturday!  See some of their information below.

Why not make a weekend out of it?  See what the CVB has to offer!

FROM REVOLVER:
The grand opening will include tours of the brewery and free beer tastings. The Agave Tamale Company, The Rib Shack, and Geppeto’s Pizza Truck, will have food available for purchase. Fish Fry Bingo will perform and there will be games and other family activities. Admission is free.

ABOUT REVOLVER BREWING
Revolver Brewing is the first craft brewery to be built in Hood County, Texas. The brewery is housed in a 6,000-square-foot new construction building and holds a 30-barrel brew house, fermentation tanks and packaging equipment.

The father and son team of Ron and Rhett Keisler has teamed up with Grant Wood, who returned to Texas after 16 years as brewmaster for the Samuel Adams brand.

Revolver’s beers are available in craft beer loving restaurants and pubs in Granbury and the Metroplex. A full list of locations is available at www.revolverbrewing.com.