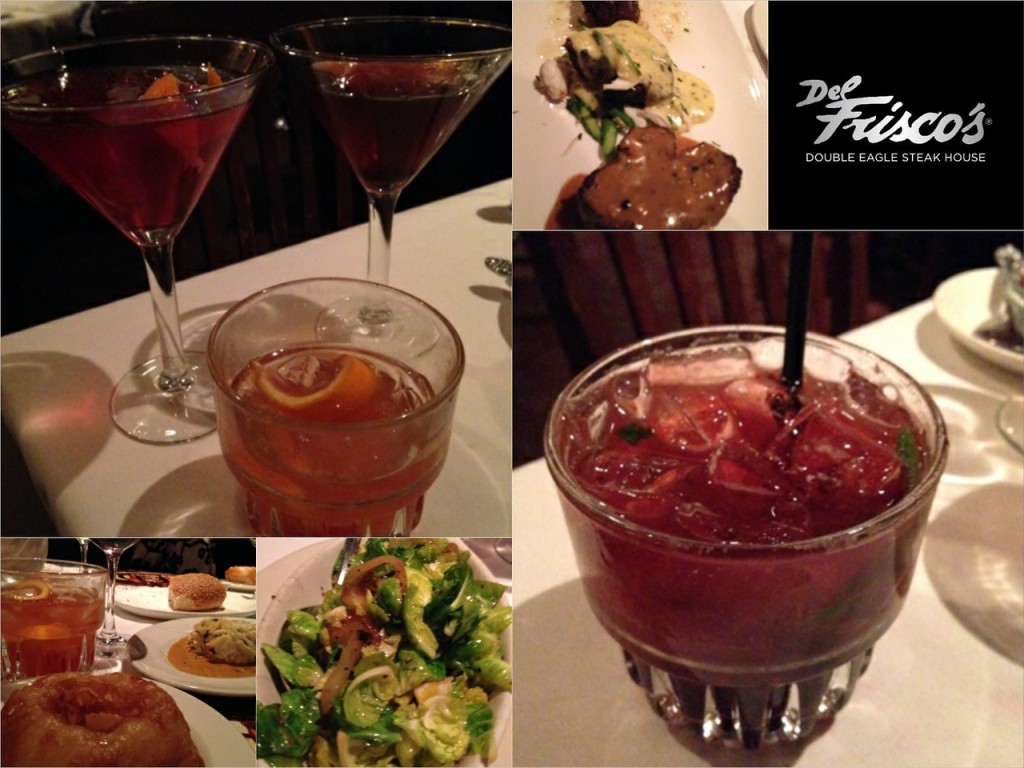 Del Frisco’s Double Eagle Steakhouse is one of the staple steakhouses not just in the Dallas area, but in the country.  Its longstanding ranking among the best steakhouses made tonight’s visit to the flagship location pretty exciting for me.

The night of excess started with an Old Fashioned in true Susie fashion (Knob Creek Bourbon, muddled cherry, orange, sugar & bitters).  It was quite standard (as I’m super spoiled when it comes to OFs) and nothing too extraordinary, but you could actually taste the bourbon used and it wasn’t too diluted, which gave it a really delightful flavor.  (Because … ya know … I love bourbon.)  Luckily, the rest of the drinks were much more unique.

If you’re in for just one drink, make it Del’s Manhattan (Maker’s Mark Bourbon, Dolin Rouge Sweet Vermouth, bitters, Luxardo cherry).  It’s as smooth as a baby’s rump and as strong as Arnold back in the day.  They actually have barrels of Maker’s Mark in the upstairs office that they use (no, I wasn’t allowed to visit them), and the Manhattan is make with Luxardo cherries (because are there any others?).

Next up was the Pomegranate Martini (360 Vodka, PAMA Pomegranate liquor, splash of cranberry), which was quite sweet and reminded me of a drink my favorite cocktail creator/roommate, Sam, would make me after a long day of classes (and before my night classes) back in the day.  PAMA gives any cocktail an incredibly rich flavor —- and it makes it healthy, right?

Last up was the Blackberry Ginger Cocktail (Woodford Reserve Bourbon, fresh blackberries, fresh lemon juice, mint, splash of ginger beer).  It sounds like a girly little drink, huh?  WRONG.  It’s a powerful and flavorful little libation with a perfect splash of ginger beer to give it a little tingle and bubble.

As for food, we started with crab cakes (holy awesome … no filler here!) and onion rings (double awesome … they’re as big as my hand), and then proceeded to entrees.  I couldn’t resist the “feature” of three 4oz steaks with different sauces on each (fois gras butter, port wine, and peppercorn … I think*).  The steaks were tender, juicy, and amazingly savory.  Dessert was pretty incredible (lemon cake and cheesecake).  Their cheesecake is whipped, not baked, which makes it so light that it’s completely irresistible.  Like seriously … I’m meant to be on a diet and I definitely partook in (and took home leftovers of) most of it.  The crust is made with pecans, so if you have a nut allergy, you’re shit outta luck.  (Whatever, dude, more for me.)

Last note: Don’t expect to park your own car here … go ahead and resign yourself to the fact that you’re going to valet.  Even on a Monday night there wasn’t a parking space to be found.  No cash to tip?  No worries … they’ll let you charge a card to get some cash at the bar!

Del Frisco’s has already released their Valentine’s Day menu and are accepting reservations, so (for the guys out there), get a move on and make your girl’s day by having a plan for the night.  (And don’t forget the flowers and lingerie.)

****I was invited to join Del Frisco’s for a meal this evening and my meal was on the house.****

We’ve all been part of the group outing where quality drinks and food are thrown to the wayside in exchange for the convenience of buckets of domestic beer and reheated frozen chicken tenders. Bowling, movie/food combos and miniature golf generally end with food regret, a half-drunk pitcher of Miller Lite approaching room temperature and a bill that does not come close to matching my level of enjoyment. With this bias admittedly in mind, I recently had the opportunity to check out the newest TopGolf location in The Colony and sample what was the beginning of an ever-changing, chef-inspired food and beverage menu.

When I arrived, I was greeted by Corporate Executive, Chef Seve Delgado, who had saved us a seat at the bar to sample their specialty cocktail menu and were later joined by Director of Food and Beverage, Mark Boyton, who was kind enough to join us straight from a flight home from a corporate F&B shoot earlier the same day. Their drink menu features craft cocktails, a house-made Sangria, a bloody mary bar and local beers specific to each location (for example, The Colony had Franconia on tap while the Dallas location features Four Corners Brewery.) They also allow bartenders throughout the company to bring new ideas based on current drink trends, which meant our first round featured Dark ‘n Stormy and a Texas Mule (because odds are even your college-aged little brother now has a copper mug and a four-pack of Fever Tree—which we’re completely cool with).

Seve told us they have to walk the line between making good drinks and being able to produce in volume, as their sales numbers are staggering*. The drinks themselves were fresh and the ingredients were strong (Tito’s vodka, Gosling’s rum, and quality ginger beer – not the mailed-in kind or coke/ginger ale sub that has ruined many a drink in other bars). Delgado told us that Top Golf’s goal is to make food and drinks as good as the game.  (Success.)

She also told me this menu was just the beginning (the location has been open less than two months), and we will soon see bourbon/whiskey (please hurry on this one), tequila and barrel-aged spirit-driven cocktails. They are working on other bar items such as house-made habanero syrup and other homespun ideas. The menu will rotate every six months and will be based on trend-watching more anything else. (We were told to expect more margaritas, more flavors of vodka and other options to arrive soon.) They are also in the process of building out a defined wine selection and have been focused on finding interesting options that pair well with their current food selections. A big bold cab may not be the best fit for trying to hit the ball cart when it cruises by (come on, admit you do it), but a focus on blends will give more options to find a good wine that matches both the person ordering it and the flavor profile of the dish.

We also tried a few of the sweeter drink offerings: the Orange Dream (a creamsicle-tasting drink that is their most popular specialty cocktail and comes in a 60oz souvenir golf bag fish bowl called the Rum-Runner Up). The sweet drinks are not my wheelhouse, but my drinking companion has experience bartending at a well-known chain restaurant and could vouch for them much better than I could. My take – they were good punch-type drinks, perfect for an outdoor setting, that don’t overwhelm with the sugar taste like so many similar options do.

In fact, despite the fact that we were only there to try the drinks, we heard about flavor profiles and the food so much, they told us they had just a few dishes we had to try – which turned into one heck of a feast. Delgado told us they “don’t want to be known for common food” and they take a similar approach to their menu as they do their specialty drinks. They allow chefs at each location to introduce concepts and ideas, and then identify the best of the best when the menu rotates March of each year. We tried the Jim Beam Devil’s Cut Brisket Chili, which was surprisingly good and admittedly way beyond what we expected. (That’ll teach us to judge a book by its cover.) We also enjoyed their take on a grilled cheese (remarkably rich and hearty with a nice tomato addition), a club sandwich that went beyond the usual chain restaurant feel and chicken and waffle sliders we learned should only be eaten with gravy added to the chicken and then syrup poured over the top. Delgado stressed they make the majority of the menu from scratch in-house and the difference showed.

We spent the last part of the night talking and it was apparent that Delgado and Boyton are just getting started. Both have been with the company for about five years and were almost bashful about their impressive resumes. Both have catered for high end clients, with Boyton casually mentioning his experiences back home in the UK catering ho-hum events like the Beckham wedding as well as special events for Elton John and Andrew Lloyd Weber. They intend to keep building a chef-driven (I should have kept a counter on how often we used the term) powerhouse and The Colony location is off to a great start.

If you’re like me and have only been to the Dallas location, you need to head up north to see the three-story, wide-open building and course (which serves as the company’s new prototype). There is a large patio still under construction and we were told the existing locations will be remodeled in the coming months to match.

*Last year in DFW alone, they outsold Cowboys Stadium. They are also the largest beer account in Collin County and have similar success in other locations (we were told the Houston location also outsold Reliant Stadium, although this doesn’t factor in what it must take to get through a Texans game this season.

Bailey’s, the Cedar Hill transplant that opened a couple years ago in the brand new Shops at Park Lane, is HANDS DOWN one of my new favorite fancy happy hour spots.  I’d say it’s right up there with Perry’s, only trumping it with its longer hours.

After visiting Bailey’s for a “working” lunch and Mother’s Day brunch, I was eager to try their famed all-night happy hour.  I was glad I finally made it in because my time there was one of the more fun nights I’ve had in a while.  (I’ll attribute that a little to the company and a little to the location.)

The whole staff seems to be there to make your experience amazing.  Perfect example: my mom invited me to meet her when I was walking out of the grocery with items that needed refrigeration.  On the way to the resto, I called and asked if they could free up some fridge space for my groceries and they gladly obliged.  The bartenders (Pedro and Kelly) will get you anything you want and will even take you for a swing on the dance floor if you so desire; on that note, Kelly is one of the better bartenders I’ve seen in Dallas from a service standpoint.

The drinks are delicious and STRONG.  Try some of their signature cocktails offered on the happy hour menu like the Cosmotini, Pomegranate Martini, or the bourbon-based, Forty Apples.  I enjoyed the VERY cucumber-y Cucumber Martini and would have died to try the French Seventy Five Martini – I didn’t want to venture into champagne on a school night.

The food is equally as good (and equally as discounted).  We got an order of their homemade chips and they were delicious as was their fresh-baked bread.  You know a restaurant is good when you see Kent Rathbun stop in for a bite!

Last word: Make sure you check in on Foursquare because they have one of the most generous check-ins specials I’ve seen – a free glass of their house Malbec, no strings attached.