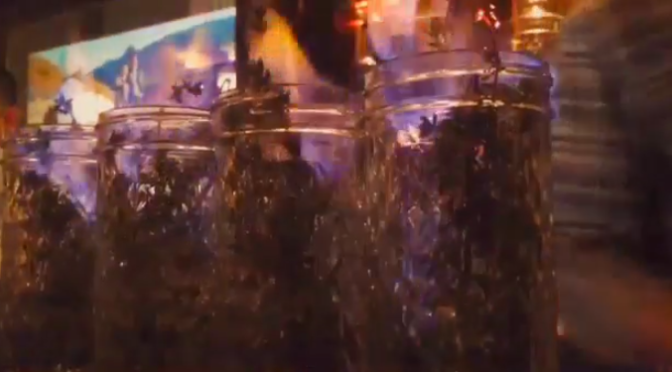 A while back, I had the pleasure of attending @MountGayRum’s Dinner at @SissysSouthernKitchen. Check out how this #bourbon-lover’s mind was changed about #rum on @susiedrinksdallas’s website!

Not a big rum fan? I can understand where you come from… From my earlier drinking days in high school…er… college, rum has always seemed like this girly liquor that was infused with fruity flavors like pineapple then mixed with even sweeter mixers and topped off with a paper umbrella. (Really?!) I am here to help change this bad rep rum has received from said rum experiences we’ve all had.

Mount Gay Rum recently invited me in for an evening of gorgeous cocktails and delicious food at Sissy’s Southern Kitchen & Bar. Having gone to the event with an open mind about rum, I was more than enthused to be persuaded to join rum’s team. After receiving the first delicious cocktail from Sissy’s amazing bar staff using Mount Gay Black Barrel Rum, fresh herb-infused ice, veggies and juices (shown being made in the video above), I was sold! It was extremely refreshing to enjoy rum without the excess amount of sweet or sour flavors.

Throughout the evening, I was honored to try more cocktails of various styles paired with some amazing dishes. I was pleasantly surprised by how much I enjoyed Mount Gay Black Barrel Rum, so much so, Sissy’s offered to make an old fashioned-inspired cocktail using it! And yes, it was pretty amazing.

Next time you’re in the market for a new beverage, have your bartender whip something up using Mount Gay Black Barrel Rum. You have this bourbon-lover’s word that you won’t be sorry!

There are some cocktail joints that make me wonder how those in Dallas with lower tolerances than I can handle the drinks.  Then I realize, it’s probably because they don’t try the entire menu.  Just three or so sips of the four cocktails I tried at Sissy’s was enough to put some pep in my step for the rest of the night.

What were these delightful drinks, you ask?  Well, they were the Southern restaurant’s  delicious new additions to the cocktail menu and the first round of happy hour offerings.  Every two or three weeks, the brilliance behind the bar at Sissy’s, Brennan and Chase, will concoct a new round of seasonal options to feature as their happy hour selections.  Served 5-7 p.m. Monday-Friday, try one of their limited-time-only cocktails for just $6.

I tried four of the five current HH drink offerings, the fifth had both of the things I avoid in my cocktails (tequila and grapefruit), so I preemptively assumed I wouldn’t enjoy it – but you should still try it (obvi).  I won’t bore you by describing the drinks I tried one-by-one as they won’t be on the menu for much longer than the next few weeks (picture of the options and their ingredients below; check out the menu board to see the current offerings).  I will, however, tell you that, if you enjoy whiskey, you MUST beg the bartender to make you a Colonel Sanders, whether it’s on the menu or not. Not prepared to start a relationship with a cocktail that will leave you after three weeks?  Try one of their regular menu cocktails (the julep can’t miss) that will promise to call you in the morning.  Even better, try one (or all three) of the options from the Belvedere tea bar.  Can you taste it now?  Think Arnold Palmer with a punch over ice — delish. Another NEW option from Sissy’s is their $24 to-go tub of fried chicken (one side included) — the finger-lickin’ fried chicken isn’t new, but taking it with you is.  They’ll include their homemade Sriracha in the to-go bag … use it.  Truth be told, I’m eating leftovers while writing this review.  My keyboard isn’t happy with me, but my tastebuds are.

So, your mission, should you choose to accept it, is to get your butt into Sissy’s, try a drink or two, and take home some delicious chicken.  Report back when you’re done.