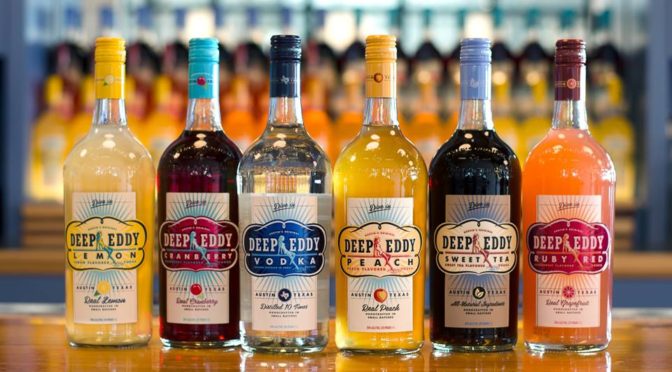 I have strong, gag-inducing memories of me and my brother dabbling in the ’90s versions of flavored vodkas, which weren’t as much about using real ingredients as just shoving artificial flavoring at you until you were convinced it did the trick. These were usually mixed with Sprite or Surge (shut up) and the whole process was just a bad hangover kit waiting to ruin your Friday-Monday mornings.

With this memory deeply rooted in my psyche, I agreed to revisit some of the flavors offered by the folks at Deep Eddy and try them in a few recipes.

If you’re not familiar with Deep Eddy Vodka and are reading a blog about drinking in Dallas, I both admire your ability to live under a rock and encourage you to visit their website. Their vodka is made here in Texas and is distilled in small batches that incorporate natural ingredients into their flavors. For this review, we were provided their Original, Cranberry, Lemon and Peach. (They also offer Ruby Red and Sweet Tea.)

To start, I asked a few friends to join me in trying each spirit neat. Each flavor stood up pretty well on its own, but the peach and lemon were the easiest to drink straight. Then we mixed each with soda water and added lime or lemon. The group’s favorites basically came down to personal flavor preferences. If you’re wondering at home, my favorite was the peach, but the plain vodka and a twist worked as well.

The next recipe was a shandy. I made mine a little stronger and, while it wasn’t my thing, the shandy drinkers in the group were happy. We also tried it with a Mexican lager and lime, which was also a great combination.

Finally, speaking of more complex drinks, we made the Southern Belle. This was a tad sweet, which was expected as the peach flavor has about twice the sugar as the other vodka flavors according to the website.

One thing I noticed in general is that these spirits, while not sweet, tip that direction really fast when mixed with other sugary ingredients. Again, the spirit stands on its own without much else, but if you’re going to make complex drinks, the plain flavor might be your best bet.  When I asked for final thoughts, the biggest skeptic in the group commented how nice it was to be able to drink flavored vodka that didn’t make her feel like a sugary mess after each drink.

No matter where you are or what you’re looking for, Deep Eddy has a vodka flavor to fit your taste and is now available in all 50 states. Use their locator to find a bar or retail store near you … and then just remember to day drink responsibly.